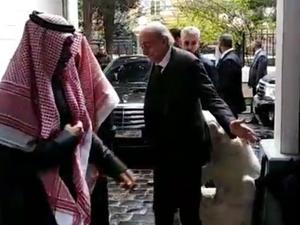 He was accompanied by Saudi Ambassador to Lebanon Walid al-Bukhari and the meeting was held in the presence of the ministers Wael Abu Faour and Akram Shehayyeb and the MPs Marwan Hamadeh and Taymour Jumblat.

Any of the conferees did not make a statement as Jumblat threw a lunch banquet in honor of his guest.

Al-Aloula had held talks with President Michel Aoun, Speaker Nabih Berri and Prime Minister Saad Hariri on Wednesday. He also hosted a dinner for a number of political guests including Jumblat and Lebanese Forces leader Samir Geagea in the evening.

Upon arrival in Beirut, al-Aloula said around 20 agreements with Lebanon will be activated and on Wednesday the Saudi ambassador announced that the kingdom was lifting an eight-year ban on the travel of Saudis to the country.