Hariri on Feb. 14 Anniversary: We're Taef Accord Guardians and We Won't 'Hand Over' Refugees 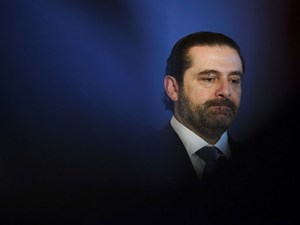 Prime Minister Saad Hariri on Thursday stressed that he and his political movement will always remain the “guardians” of the 1989 Taef Accord, which ended Lebanon’s civil war, as he emphasized that he will not accept to “hand over” the Syrian refugees to Damascus “as hostages.”

“Today, we gather, 14 years after the assassination crime, and 11 years after the start of the Special Tribunal for Lebanon. The dream of Rafik Hariri is still with us after all these years and his reconstruction, development and stability project is still being mentioned by each Lebanese who wants to see the country full of work,” said Hariri at Beirut’s Seaside Arena in a speech marking the 14th anniversary of the assassination of his father, ex-PM Rafik Hariri.

“After a few months, the verdict session in the case of the Martyr Premier and his companions will be held. Now we can say that 2019 will be the year of justice that we have been waiting for,” Hariri added.

“We don’t see and don’t accept to see the verdict as a way to take revenge. The verdict is the road towards justice and the refusal to cover up the truth no matter how harsh it is,” the premier went on to say.

He added: “Rafik Hariri was not martyred for the country to be destroyed. Rafik Hariri’s martyrdom unified the Lebanese and we won’t give anyone the chance to use the verdict as a tool to spark strife between the Lebanese.”

Hariri said that those who killed his father knew what it means “when a man like him, with his relations, capability and popularity, stands in the face of those who want to confiscate the decision of the country.”

“All intimidation attempts didn’t work. They launched the most violent political and media campaigns against him; they blocked his project and threatened him with imprisonment, expulsion from the country and breaking Beirut on his head but all this didn’t work so they killed him,” the PM Added.

Turning to the current period and the formation of the new government, Hariri said: “Today, we have a big workshop in the government and Parliament.”

Lamenting that the political parties “spent ten years tying the fate of our country to the fate of the wars in the region,” Hariri noted that “we paid the price from our political, economic and social stability.”

“Today we are at a crossroads. We either continue to drown in disputes over shares or we decide to start the workshop. Time is not for showing off our strengths or settling scores because people are bored of hearing repeated words,” Hariri warned.

“The time when you can talk with a loud voice and gain popularity is long gone and doesn’t build a state or take the garbage from the streets.

The time of overbidding about honesty and integrity while accusing others day and night doesn’t work anymore especially with the new generation who wants work, job opportunities, procedures and laws that fight the waste of public money and corruption. The youths want a clean country, not mini-states for parties and sects,” Hariri cautioned.

He said that the new government has “a clear program with clear funding and mechanisms based on transparency and reforms.”

“There is no chance for wasting public funds or for the thieves of shares and opportunities. It is an investment program in projects and services in all regions, especially the deprived regions,” Hariri explained.

He added: “Rest assured that the work program has no sectarian or regional identity but Lebanese identity par excellence for all people and regions.”

“The ball is in our court, and the challenge is on everyone. I regard it as a personal challenge to the Presidency, to me, to the government and to Parliament,” Hariri went on to say.

Referring to criticism, the PM said that there is talk that the country is “gathering more debt” and that “the state is offering itself for sale.”

“This is talk that has nothing to do with the economy and the investment program. It aims at nagging and blocking work and comes from the old books of obstruction... Personally, I will not remain silent over any attempt to block the work and obstruct the government program,” Hariri warned.

He added: “We hope for ‘zero’ problems in the Council of Ministers and with all the partners in the country because nothing should prevail over the stability of the country and over ending the farce of electricity cuts, the waste and sewage problems and garbage and corruption.”

And while noting that he is not “seeking to stop the debate on the government's program and on key issues in the country, because there can’t be a normal and healthy political life without discussion, dialogue, opposition and exchange of ideas,” Hariri said that it is not reasonable “after all the hard work exerted at the CEDRE Conference” to return to the “politics of no solutions or that the Council of Ministers returns to political bickering.”

“President Aoun, Speaker Berri and I have decided to turn the Council of Ministers and Parliament into a work cell,” he added.

Referring to recent controversy over the Taef Accord, Hariri emphasized that he “will not abandon Taef or accept the breach of Taef.”

“We are the guardians of the Taef agreement, today and tomorrow!” he stressed.

As for the thorny issue of Syrian refugees, Hariri said that the interest of the country lies in their return to their country in a “dignified and safe manner.”

“The best thing we can do for the displaced is to work for their return to their country, voluntarily, and I emphasize on the word voluntary. Our openness to the Russian initiative goes in this direction and the international community is required to take additional practical steps to end the tragedy of displacement and alleviate social, service-related and financial burdens from the state in all regions,” he added.

“I believe that the regime in Syria wants to take revenge on the displaced and is imposing conditions on their return,” Hariri noted.

“We cannot accept under any circumstances that our country be turned into a tool for handing over the displaced so they become hostages of the regime,” the premier underlined.

He also emphasized that Lebanon “is not a state affiliated with any axis and is not an arena for the arms race in the region.”

“Lebanon is an independent Arab state. It has a constitution, laws, institutions, and Arab and international commitments. A state that affirmed its commitment to disassociation. Anything other than this is a point of view that does not obligate the state or the Lebanese,” Hariri added.

Keep using the name of Rafik Hariri for your own personal gain. Nobody buys your rhetoric anymore. You should be ashamed of yourself.

Best son of an ex-prime minister, ever!

What a Failure with a capital F.

The occasion is about your slain father and not your philosophy about how to run the government. Exploiting his name to advance your repeated failed agenda is cheap and shameful.

Mr. Saado Hariri has earned my utmost respect and captured my wildest imagination for reasons unknown to me.

The prime minister should use blablablablablabla's deep and wide luv tunnel as a workshop to raise more revenue for Lebanon especially on Valentine's Day. There are millions of lonely and hungry men who would enjoy exploring such an iconic luv tunnel.

06 February 2019 Nasrallah: Should a war be waged against Iran, it will certainly not be left alone in it.
http://www.naharnet.com/stories/en/256231-nasrallah-iran-can-give-army-air-defense-solve-electricity-problem

11 minutes ago Hariri: Lebanon does not belong to any axis and is not an arena for the race to arms. Lebanon is a state that has a constitution and it has stressed its commitment to the policy of dissociation.
http://www.naharnet.com/stories/en/256557-pm-saad-hariri-at-rally-commemorating-slain-ex-pm-rafik-hariri