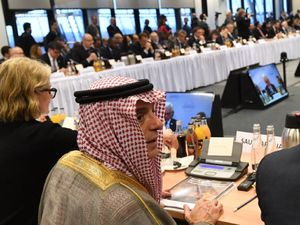 Saudi Arabia and other Gulf Arab states which do not recognise Israel sent top diplomats to attend this week's conference alongside Netanyahu, something the prime minister and his US ally have talked up as a new regional axis against Iran.

Israeli correspondents who travelled with Netanyahu to the two-day conference said that the prime minister had hinted to them during a briefing that his staff had footage of Gulf ministers addressing a session on Iran on Wednesday.

Israel's Maariv newspaper said that the following day, "the prime minister’s office posted (and shortly thereafter deleted) a video from the closed introductory panel about Iran."

On Friday, the Haaretz newspaper ran what it said were leaked clips, in one of which  Bahrain's foreign minister is seen saying that Iran poses a "more toxic challenge" to the region than Israel's occupation of the Palestinian territories.

"We grew up talking about the Palestine-Israel dispute as the most important issue," Foreign Minister Khaled bin Ahmed al-Khalifa tells fellow delegates.

"But then, at a later stage, we saw a bigger challenge, more toxic -- in fact the most toxic in our modern history -- which came from the Islamic republic.

"If it wasn't for the toxic money, guns and foot soldiers of the Islamic republic, I think that we would have been much closer today in solving this issue with Israel."

The small but strategic kingdom is mostly Shiite, according to unofficial estimates, and its Sunni rulers blame Iran for decades of Shiite-led protests that flared up again in 2011.

In another clip published by Haaretz, Saudi Minister of State for Foreign Affairs Adel al-Jubeir accuses Iran of spreading "mischief" throughout the region.

"Building ballistic missiles and giving them to terrorist organisations is unacceptable and there are resolutions that say Iran should be punished for that," he said.

Saudi Arabia has repeatedly accused of Iran of providing weapons to Huthi rebels in Yemen who have been battling a Saudi-led intervention force since 2015. Tehran denies the allegation.

Though Saudi Arabia and Israel have no official diplomatic ties, they share a determination to limit the expansion of Iranian influence in the Middle East.

Netanyahu praised the conference organised by Washington in the Polish capital as a "historical turning point" for the region.

"An Israeli prime minister and the foreign ministers of the leading Arab countries stood together and spoke with unusual force, clarity and unity against the common threat of the Iranian regime," he told reporters on Thursday.

Nabil Shaath, an adviser to Palestinian president Mahmud Abbas, said the US-organised conference aimed to "normalise" the Israeli occupation of Palestinian territory in line with the staunchly pro-Israel policy adopted by US President Donald Trump.

Iranian President Hassan Rouhani, who was in the Black Sea resort of Sochi for talks with his Russian and Turkish counterparts on the future of Syria, dismissed it as an "empty result."

That was an Israeli backstabbing of the Arabs destined to serve Natanyahu’s re-election campaign.
Israel was expecting a joint statement, alas Arabs aren’t quite ready yet.

Good to see the world uniting against the tyrannical Balsamic rebublick of Iran. the axis of evil was having its side show in the resort of Sochi blanning its next beace bombing terror blot somewhere around the world.....

The World without Europe, India, China,Russia, and more than 80% of the countries???? Not to mention most of the countries who did attend (including Egypt and Jordan) got paid just to listen to stupid speeches.

As far as the future of the despots puppet collaborators rulers of KSA, Bahrain, and the UAE history has shown they have 2 future options: They will be exiled like the Shah of Iran, Antwan Lahd and King Farouk. Or turned into Swiss Cheese like Anwar Sadat and the King of Iraq.

As if the attendance of Gulf ministers in Warsaw was a secret for Israel to leak a video. Iran is the only threat in the region and the alliance with Israel is a necessity.