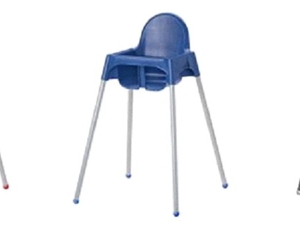 Swedish furniture giant IKEA has recalled 169,000 baby high chairs sold in the United States and Canada over reports that the safety belts can open unexpectedly.

The U.S. Consumer Product Safety Commission and Health Canada announced the recall on Thursday and IKEA posted a warning on its website over the ANTILOP high chair, sold from August 2006 through January 2010 for around $20.

The safety regulators said IKEA had received eight complaints about the safety belts worldwide, including three reports of children suffering minor injuries after falling from the chairs.

The chairs were manufactured in China and marketed throughout North America.