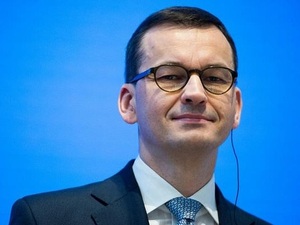 Poland's prime minister on Monday cancelled Warsaw's participation in a summit in Jerusalem, accusing Israel's foreign minister of "racist" comments about the actions of Poles during the Holocaust, in a row that has stoked outrage and soured relations.

Mateusz Morawiecki's decision to scotch Poland's involvement in the summit of central European nations follows days of angry exchanges that were originally sparked by quotes from Israeli leader Benjamin Netanyahu over the role of Poles during World War II.

Czech Prime Minister Andrej Babis said said the summit with Israel and the Visegrad Four -- the Czech Republic, Hungary, Poland and Slovakia -- was cancelled but that there would be bilateral talks.

Polish leader Mateusz Morawiecki, who said on Sunday he would not attend the Jerusalem summit over the row, said the country's foreign minister would now not be attending the meeting.

"The words of the Israeli foreign minister are racist and unacceptable," he said.

Poland's foreign ministry had summoned Israeli ambassador Anna Azari over the remarks by acting Foreign Minister Israel Katz on Sunday, the second time in just days that Warsaw has taken such action.

Katz told Tel Aviv-based international television station i24 News that "there were many Poles who collaborated with the Nazis, and like Yitzhak Shamir, whose father was murdered, said: Poles suckle anti-Semitism with their mothers' milk."

The Visegrad Group, often known as the V4, was due to hold its first summit in Jerusalem Monday and Tuesday for talks with Israeli officials.

Foreign Minister Jacek Czaputowicz had been due to replace Morawiecki before he pulled the plug on Poland's participation.

Morawiecki said it was up to other central European leaders due to attend the summit, including the prime ministers of Hungary and Slovakia, to decide how they would proceed.

Czech premier Babis told reporters that since Poland has cancelled its participation "the trip will change to bilateral talks between the individual countries and there will be no V4 summit with Israel".

The initial row broke out last week when Netanyahu -- who was quoted in Haaretz newspaper as saying that "the Poles collaborated with the Nazis" -- was condemned in Poland for appearing to accuse all Polish people of cooperating with Nazi Germany during World War II.

Warsaw has long been at pains to state that Poland, which was occupied by Nazi Germany, could not have and did not collaborate in the Holocaust although individual Poles gave up Jews to the Nazis.

The Israeli prime minister's office said on Friday that Netanyahu had not implicated all Poles in the Holocaust.

It insisted that Netanyahu was "misquoted" in Haaretz and other publications that reported different versions of the quote.

The clarification came hours after the Polish foreign ministry had summoned Azari over the remarks.

Netanyahu was in Warsaw last week for a two-day summit on the Middle East, co-hosted by Poland and the United States, which focused on isolating Iran while building Arab-Israeli ties.

The fresh controversy in Polish-Israeli ties comes after a row last year over a Polish law that made it illegal to accuse the Polish nation or state of complicity in Nazi German crimes.

After protests from Israel and the United States, Poland amended the law to remove the possibility of fines or a prison sentence.