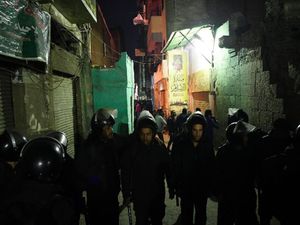 A suicide bomber detonated an explosive device in the heart of ancient Islamic Cairo, killing three policemen who were chasing him through its narrow alleyways, medical and security sources said on Tuesday.

Monday evening's bombing, in the Darb al-Ahmar neighbourhood near the historic Al-Azhar mosque, also wounded two other policemen, the interior ministry said in a statement.

"As security forces surrounded the man and were about to stop him and bring him under control, an explosive device in his possession detonated," the ministry said.

Video posted on social media on Tuesday morning showed police catching up with a male cyclist before being enveloped by an explosion.

The ministry said the bomber was being chased as part of a manhunt for those responsible for a foiled bomb attack near a mosque in Cairo's twin city of Giza on Friday.

Monday evening's blast damaged several shops in the alleyway which lies in an area frequented by foreign tourists.

"The problem is not only that but also that people died. This is a tourist area and such incidents affect it," he said.

Egypt's tourism industry, which had already been hit by the turmoil that followed the Arab Spring revolution of 2011, has been further damaged by a series of deadly attacks against foreign tourists by suspected Islamist militants.

In December, three Vietnamese holidaymakers and their Egyptian guide were killed when a homemade bomb exploded on their bus near the famed pyramids in Giza.

Authorities have made major efforts to lure tourists back, touting a series of archaeological finds and a new museum next to the pyramids, as well as enhanced security at airports and around ancient sites.

Tourism has slowly picked up, with tourist arrivals reaching 8.3 million in 2017, compared with 5.3 million the previous year, official statistics showed.

But that figure was still far short of the record influx of 2010 when more than 14 million visitors flocked to see the country's sites.

Since the 2013 ouster by the army of elected Islamist president Mohamed Morsi, Egypt has been battling a persistent jihadist insurgency, centred in the Sinai Peninsula.

In February 2018, security forces launched a major operation against the local affiliate of the Islamic State group, which has been mainly focused on volatile North Sinai province but has also targeted jihadist cells elsewhere in the country.

Egypt has often announced the killing of jihadists during Operation Sinai 2018, but statements on significant losses by the security force have been rare.

On Saturday, the army reported that an attack on a checkpoint in North Sinai left 15 soldiers dead or wounded and seven of the suspected jihadist assailants killed.

On Tuesday, the interior ministry announced that 16 suspected jihadists had been killed during raids in the provincial capital El-Arish. It did not say when.

The raids, on a deserted building in the city's Al-Obaydat neighbourhood and a house under construction in the Abu Eita district, targeted suspected "terrorist cells" in the city and triggered firefights in which the 16 were killed, the ministry said.