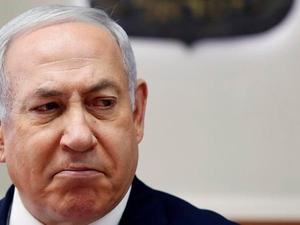 The two main challengers to Israeli Prime Minister Benjamin Netanyahu in April polls announced an electoral alliance on Thursday in a bid to defeat him.

Benny Gantz, a respected former military chief of staff, and centrist politician Yair Lapid said in statements they would form a joint list for the April 9 elections and rotate as prime minister if they won.

Gantz heads his recently launched centrist Israel Resilience party, while Lapid leads Yesh Atid, which currently has 11 seats in parliament out of 120.

Opinion polls have shown the two as the main challengers to Netanyahu, who has been expected to win despite corruption investigations into his affairs.

"Out of a sense of deep national responsibility, Benny Gantz, Yair Lapid and Moshe Yaalon decided on the creation of a unified list which will serve as Israel’s new party of government," the statement from Yesh Atid said.

"The party will put forward a new leadership team which will guarantee the security of Israel and will reunite the divided elements of Israeli society."

Netanyahu has been prime minister for a total of around 13 years and currently leads what is seen as the most right-wing government in Israel's history.