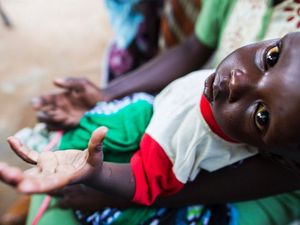 "The food security situation continues to deteriorate," said Isaiah Chol Aruai, chairman of the National Bureau of Statistics, as he released the latest round of mind-boggling food assessments.

Nearly a fifth more people now need food aid to survive than when a man-made famine was declared in 2017, and the risk of another famine is a "real risk", the UN said.

Aruai, speaking to reporters in Juba alongside the heads of the UN's World Food Programme (WFP) and the Food and Agriculture Organization (FAO), pleaded for more aid to avert further catastrophe.

When famine was declared in 2017, 4.9 million people or 40 percent of the country needed food aid. Now over 6.1 million people, or just over half the population, are assessed to be in "acute food insecurity".

Without action, those figures will worsen to over 6.8 million people, or some two-thirds of the country.

UN-backed assessments rank hunger levels according to the Integrated Food Security Phase Classification (IPC) system, which ranks hunger levels from one to five. Level five is classified as "catastrophe," and when stretched to 20 percent of the population, becomes famine.

Today, some 30,000 are judged to be in level five in the eastern Jonglei and central Lakes regions. Those starvation numbers will rise to 50,000 without aid.

"Most in need of assistance are malnourished women and children," WFP boss Simon Cammelbeeck said.

The war began in December 2013 when President Salva Kiir accused his former deputy Riek Machar of plotting a coup.

A brutal conflict flared up, often fought along tribal lines and characterised by massacres of civilians, rape and looting. Nearly 400,000 people died and millions were forced to flee their homes or to the brink of starvation.