Sudan Opposition to Keep Up Protests despite Emergency 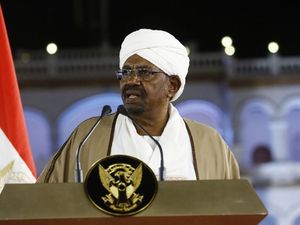 Sudan's main opposition party on Saturday dismissed President Omar al-Bashir's declaration of a state of emergency, saying protesters would keep up their campaign until his three-decade rule was ended.

On Friday, Bashir imposed a nationwide state of emergency and dissolved the federal and provincial governments in a bid to quell two months of almost daily demonstrations that have rocked his iron-fisted regime.

"Dissolving the government and imposing a state of emergency is nothing but a repetition of this regime's failures," the opposition National Umma Party said in a statement.

"Nothing will satisfy the people who are taking to the streets except the overthrow of this regime."

The National Umma Party, whose leader Sadiq al-Mahdi was Sudan's elected prime minister when Bashir seized power in an Islamist-backed coup in 1989, has thrown its weight behind the protests.

The party has signed up to a "Document for Freedom and Change" also signed by the Communist Party and the political wings of several rebels groups in Sudan's outlying regions.

The text sets out a vision for a post-Bashir future with a reformed justice system and a raft of measures to halt Sudan's precipitous economic decline, which has been the driving force behind the protests.

A government decision to triple the price of bread was the immediate trigger for the first demonstration in the farming town of Atbara on December 19 and the protests swiftly mushroomed as they struck a chord with the large numbers of Sudanese who have seen their purchasing power plummet in recent years.

The protest campaign has been led by the Sudanese Professionals Association, an umbrella group of teachers, doctors and engineers, who have been among the worst hit.

Officials say 31 people have died in protest-related violence so far. Human Rights Watch says at least 51 people have been killed.