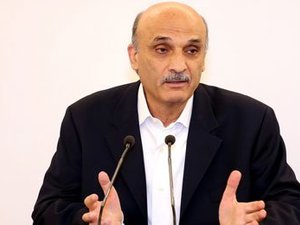 Lebanese Forces leader Samir Geagea wondered about the identity of “the political party that was behind convincing President Michel Aoun” that normalizing ties with Syria would facilitate the return of refugees to their country.

The objective is “re-floating Bashar al-Assad's regime, which does not seem to have the intention to return them at a time Syria is witnessing a demographic change,” Geagea said in an interview with Asharq al-Awsat newspaper.

“What prevented the Free Patriotic Movement's ministers and their allies, who were the majority in the governments of Najib Miqati and Tammam Salam, from communicating with the Syrian regime to return these people, whose return should be secured as soon as possible without being linked to the political solution,” Geagea added.

Noting that there is “an Iranian need to refloat Assad” and that Hizbullah is seeking to “promote it,” the LF leader called for “communicating with the international community to provide safe zones for them in Syria” and to “fund” such a return.

“Assad, who used to claim that he had the upper hand in Lebanon, can no longer bear any delay in the normalization of ties between the two countries,” Geagea went on to say.

The LF leader also revealed that “the Syrian regime is bringing groups of a certain sectarian affiliation, specifically from Afghanistan, Pakistan and some countries, to naturalize them in certain areas in Syria from which the original residents have been displaced.”

Nobody did. It is just a pretext for aoun to reward his masters in Damascus.