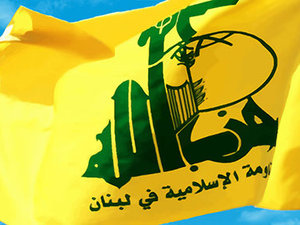 Britain on Monday said it will ban the political wing of Hizbullah, making membership of the movement or inviting support for it a crime.

The decision follows outrage over the display of the Hizbullah flag, which features a Kalashnikov assault rifle, at pro-Palestinian demonstrations in London.

"Hizbullah is continuing in its attempts to destabilize the fragile situation in the Middle East," Home Secretary Sajid Javid said in a statement.

"We are no longer able to distinguish between their already banned military wing and the political party. Because of this, I have taken the decision to proscribe the group in its entirety," he said.

Subject to Parliament's approval, the order will go into effect on Friday and being a member, or inviting support for Hizbullah will be a criminal offense, carrying a sentence of up to 10 years in prison.

Hizbullah made electoral gains in Lebanon last year and now has three ministers in the government. The U.S. and others accuse the group of destabilizing the region through its military intervention in Syria on the side of President Bashar Assad's government.

"It is clear the distinction between Hizbullah's military and political wings does not exist," Foreign Secretary Jeremy Hunt said in Monday's statement.

"This does not change our ongoing commitment to Lebanon, with whom we have a broad and strong relationship," he said.

There was no immediate comment from Hizbullah officials in Beirut.

The British government is also banning Ansarul Islam, a jihadist group which emerged near the border between Mali and Burkina Faso in 2016, and the Group to Support Islam and Muslims (JNIM), which has sworn allegiance to Al-Qaida in the Islamic Maghreb.

The European Union put the armed wing of Hizbullah on its terrorism blacklist in 2013, due to Hizbullah's alleged role in blowing up an Israeli tour bus in Bulgaria. But unlike the United States, they had up till now differentiated between the group's military and political wings.

The British ban comes as the United States is increasing its pressure on Hizbullah, placing several sets of sanctions on the group and its regional backer, Iran.

Last week, the U.S. ambassador to Lebanon described what she labeled as Hizbullah's "growing" role in the new Lebanese cabinet as a threat to the country's stability. U.S. officials have also expressed concern that Hizbullah would exploit the ministries it runs to funnel money to fund the group's operations.

He's not in Lebanon.

Armed forces other than LAF are banned south of the Litani, so what is Hizballah doing there?

are you in lebanon ya heretic?

Hezbollah is a Lebanese Party and they have every right to be on Lebanese soil, Israelis got no say on that matter.

Yes I am in Lebanon, unlike you.

Do other parties in Lebanon have the right to carry weapons and claim to be resisting Israel or is that right only exclusive to the shia party from Iran?

Pro Israeli sentiment is illegal. That’s definitely your personal interpretation of the law. Last time I checked, the LAF and the IDF were communicating with each other thru the UNFIL channel which is also illegal according to the same laws.
Someone has to break the cycle of stupidity, as a proud and free Lebanese citizen I don’t perceive Israel as my enemy but rather as a futur friend and ally. Syria and Iran are far more destructive. Damascus delenda est.

You are not even Lebanese s.os you are a jew.

I wasn’t aware that Judaism was a citizenship. So you Shia are Yemenites?

What really matters is that Hizbullah power and arms do not belong to Lebanon. Their presence, financing is the wil’of the wali al faquif and not the will of the Lebanese people.

With your level of education and understanding its no wonder Israel has it easy. Bajam wa bidalkum bajam. Britain has just shown where the world is heading in banning and highlighting Kizballah's terror activities and your pea brain is saying its irrelevant? Bravo ya Hussain follow your sheep wash your feet and pray thats about all you cam do.

bless anyone person, entity, organization, brigade or country that inflicts extreme pain and unbearable suffering, death, torture, and destruction upon the iranian sectarian terrorist militia and its members, sponsors, supporters or followers wherever they may be.

15 minutes ago France's Macron said Paris will continue to differentiate between Hizbullah's political and military wings, after London said it will outlaw the political wing.

What is Nassrallah? Is he from the political wing Mr. Macron or the military wing of the iranian terror group?

You are confusing Jesus Christ with the blood thirty mass murdering sword welding head chopping Mahdi. Are you related to the Brazilian who thinks he's Portuguese, Lebanese, Colombian, Syrian and God knows what else. He wouldn't know a bible if it fell on his head, so he keeps confusing Jesus with someone who cut's off heads. He has ten Passports that he found in cereal boxes that his mom buys him for breakfast. He keeps them safe under his pillow. He's never traveled anywhere so they are pristine.