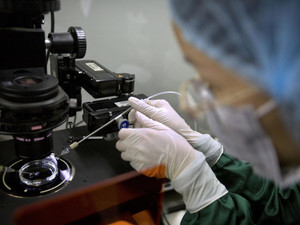 China has drafted new rules for biotechnology research, including fines and bans for rogue scientists, after a Chinese researcher caused a global outcry by claiming that he gene-edited babies.

Scientist He Jiankui's shock announcement that his experiment led to the birth of the world's first genetically-modified babies in November put a spotlight on China's lax oversight over scientific research.

He claimed to have altered the DNA of the twins to prevent them from contracting HIV by deleting a certain gene under a technique known as CRISPR.

Health authorities under the central government would manage such research.

The State Council, China's cabinet, would be responsible for "the supervision and administration of clinical research and applications throughout the country," according to the rules.

The new draft proposes fines of between 50,000 and 100,000 yuan ($7,500 and $15,000) for scientists or institutions that carry out research without proper authorisation, and the government can halt and confiscate the work.

A scientist who earns "illegal income" from unauthorised research would be fined 10 to 20 times the amount of the illicit earnings.

Depending on the severity of the violation, a scientist can be banned from their field of work for six months to one year.

"If the circumstances are serious, their medical practice licence shall be revoked and the individual shall not engage in clinical research for life," the rules say.

He Jiankui has been placed under police investigation and the government ordered a halt to his research work.

A government probe found that He had "forged ethical review papers" and "deliberately evaded supervision", according to state media.

He had recruited eight couples for the gene-altering trial, and the investigation confirmed that a second woman became pregnant.

It is unknown if she has given birth yet.

Gene-editing for reproductive purposes is illegal in most countries, but China does not have a law banning it.

A brief regulation issued by the health ministry in 2003 prohibits gene-editing of human embryos, but does not stipulate any punishments for violators.

Following the storm sparked by He's announcement, scientists have called for an international treaty on gene-editing.