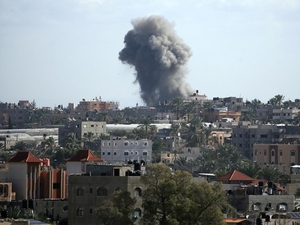 Israeli aircraft targeted several militant sites in Gaza after an "explosive balloon" launched from the Palestinian enclave damaged a house in the Jewish state, the army said Thursday.

"An explosive balloon launched from the Gaza Strip damaged a house in an Israeli community, apparently after exploding in the air," the army said in a statement.

"In response, IDF fighter jets and attack helicopters struck a number of terror targets in a Hamas military compound in the central Gaza Strip," the statement said.

There were no reports of casualties in Gaza.

Palestinians in Gaza have for months been sporadically launching balloons with incendiary and explosive devices at southern Israel in parallel with weekly protests and clashes taking place at the fence.

At least 251 Palestinians have been killed by Israeli fire since March 2018, the majority shot during weekly border protests and others hit by tank fire or air strikes.

Two Israeli soldiers have been killed over the same period.

Israeli has fought three wars with Gaza's Islamist rulers Hamas since 2008 and the enclave has been under a crippling blockade for more than a decade.