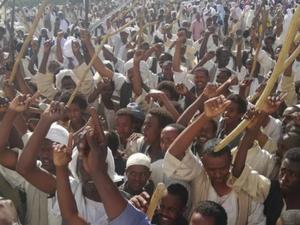 Sudanese authorities have released a senior opposition leader who had been detained since December in connection with demonstrations against President Omar al-Bashir's rule, his party said on Tuesday.

Omar el-Digeir, the chief of the opposition Sudanese Congress Party, was arrested and jailed days following protests that erupted on December 19 after a government decision to triple the price of bread.

The authorities launched a widespread crackdown to curb the protests as they mushroomed into nationwide demonstrations against Bashir, who swept to power in an Islamist-backed coup in 1989.

"The chief of our party, Omar el-Digeir has been released after two months in detention," the Sudanese Congress Party said in a statement, without specifying when he was set free.

"But 40 other party leaders are still in detention," it said.

On Tuesday, Digeir vowed to push on with protests against Bashir's rule.

"We assure our people that our party is fully committed to continue with the peaceful struggle until we achieve success," he wrote on Twitter.

British ambassador to Khartoum, Irfan Siddiq, who met Digeir on Tuesday after his release said the opposition leader had been in  detention for 67 days without charge.

"All remaining political detainees should be released immediately," Siddiq wrote on Twitter.

"No political consensus can be reached in Sudan without a conducive political environment."

Over the past decade, the Sudanese Congress Party has emerged as an active opposition group which regularly stages demonstrations and rallies against the authorities.

Most of its supporters are youths, mainly university students and graduates.

Deadly clashes between protesters and security forces have left 31 people dead, officials say, while Human Rights Watch says at least 51 have been killed including medics and children.

On February 22, Bashir declared a year-long state of emergency to quell the protests after the crackdown failed to suppress the movement.

He also dissolved the federal and provincial governments, and appointed 16 army officers and two security officers from the feared National Intelligence and Security Service as governors of the country's 18 provinces.

Protesters accuse Bashir's administration of mismanaging the country's economy and have called on the 75-year-old president to step down.

Although protests erupted after the bread price hike, anger had been mounting across Sudan for years amid an ongoing economic crisis led by soaring inflation and shortage of foreign currency.

Bashir has remained defiant, banning unauthorised rallies and setting up special emergency courts to investigate violations during the state of emergency.

Protests have dwindled since the state of emergency came into effect but on Thursday several demonstrations took place in the capital Khartoum and its twin city of Omdurman.

Hundreds of protesters were arrested and put on trial at emergency courts.

Eight demonstrators were sentenced to jail -- in the first such rulings by emergency courts -- with four handed five-year prison terms each, the official SUNA news agency said.

Three others were sentenced to three years in jail each and one received a six-month prison sentence, said SUNA, adding they had all violating the ban on protests.

The protests that have rocked Sudan since December were led by the  Sudanese Professionals' Association, a group of unions of teachers, doctors and engineers.

But several opposition political groups have since joined the SPA to form an umbrella group called the Alliance for Freedom and Change.