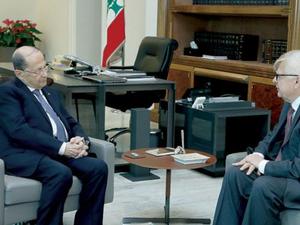 Lebanon and Moscow pursue the preparations for President Michel Aoun’s visit to Moscow on March 25 at the invitation of Russian President Vladimir Putin, the Saudi Asharq al-Awsat newspaper reported on Wednesday.

Russian Ambassador to Lebanon, Alexander Zasypkin has met on Monday with Foreign Minister Jebran Bassil and on Tuesday with President Michel Aoun to discuss the agenda of the visit, said the daily.

“Zasypkin was keen to record what Aoun wants to discuss with Putin, which is divided into two parts: First, activate the work of the Lebanese-Russian Joint Committee to address the issue of displaced Syrians in terms of their safe return to Syria,” unnamed sources following on the preparations told the daily.

“Second, another issue which will be the main focus of the meeting is cooperation in the field of energy. A Russian company will explore oil in an agreement that is the first of its kind in the history of the relations between the two countries. Aoun will affirm Lebanon’s right to protect its natural gas field in Block 9,” added the sources.

Aoun will arrive on March 25 in Russia and will meet Putin on the 26th.

So our senile quisling will be told what to do on two counts from Putin:
1.Russia will expect you to provide assistance to the wealthy Syrians in Lebanon who support Bashar
2.Russia will also let you know when and what it will do with the offshore gas deposits, specifically in Block 9 now that Israel has explained to Putin.

Last but not least abide or you will be "putin" you out of a job post haste!