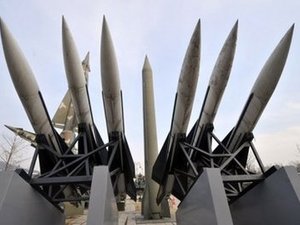 Activity has been detected at a North Korean long-range rocket site, suggesting Pyongyang may be pursuing the "rapid rebuilding" of the facility after the collapse of the Hanoi summit, according to analysis of satellite imagery.

Another research website suggested the rebuilding of the site may have started even before last week's meeting between North Korean leader Kim Jong Un and U.S. President Donald Trump.

The summit ended abruptly after the pair failed to reach an agreement on walking back Pyongyang's nuclear program in exchange for sanctions relief.

The renewed activity was recorded two days after the talks and may "demonstrate resolve in the face of U.S. rejection" of the North's request for an easing of sanctions, said researchers at the Washington-based Center for Strategic and International Studies (CSIS).

"This facility had been dormant since August 2018, indicating the current activity is deliberate and purposeful," it said.

Kim had agreed to shutter the Sohae missile-testing site at a summit with the South's President Moon Jae-in in Pyongyang, as part of confidence-building measures, and satellite pictures in August suggested workers were already dismantling an engine test stand at the facility.

But CSIS said building activity is now "evident" at the Sohae Satellite Launching Station, from where Pyongyang launched satellites in 2012 and 2016.

North Korea was later banned by the U.N. security council from carrying out the space launches, as some of its technology was similar to that used for intercontinental ballistic missiles.

The pictures show a moving structure that had been used to carry launch vehicles to a launch pad on rails has been restored, it said.

"Two support cranes are observed at the building, the walls have been erected and a new roof added. At the engine test stand, it appears that the engine support structure is being reassembled," the 38 North reported.

In a briefing to parliamentarians this week, Seoul's spy agency said it had detected signs of work at the site.

But Joel Wit, the director of the 38 North project cautioned that the evidence was not necessarily "consistent with preparations for an ICBM (intercontinental ballistic missile) test".

"Aside from the fact that (North Korea) has never tested an ICBM from Sohae -- it's a space vehicle launch site -- preparation for any launch would require a wide range of activities not observed in the imagery," it said.

Ankit Panda of the Federation of American Scientists agreed the imagery does not suggest an imminent sign of an ICBM launch, but it could be a "reminder of when times were worse and what stands to be lost if the process collapses."

According to 38 North, the efforts to rebuild structures at the Sohae facility started sometime between February 16 and March 2 this year, based on what commercial satellite imagery shows.

"Timing matters. ... the imagery tells a story that this took place amid the Biegun-Kim Hyok Chol working-level talks in the weeks leading up to Hanoi," Panda tweeted.

"Choe Son Hui warned of Kim Jong Un's waning 'will' and Kim Jong Un himself warned the US not to test his 'patience' on Jan 1."

In 2017, it claimed it had become a nuclear state, capable of fitting a viable nuclear weapon on an ICBM that could reach as far as the United States' eastern seaboard.

In response, the U.N. Security Council later banned the North's main exports -- coal and other mineral resources, fisheries and textile products -- to cut off its access to hard currency.

At their groundbreaking first summit in Singapore last year, Kim and Trump produced a vague statement on the "denuclearization of the Korean peninsula."

There were high expectations for Kim and Trump's second meeting in Hanoi, but no agreement was reached. Despite the stalemate, both sides said they were open to further talks.

John Bolton, the U.S. national security adviser, however said on Tuesday that the U.S. would look at "ramping those sanctions up" if Pyongyang did not give up its nuclear weapons program.