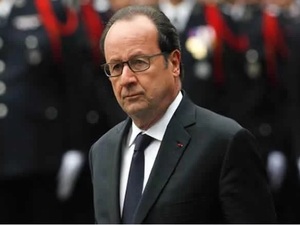 President Michel Aoun received on Thursday the former French President Francois Hollande who plans to make a series of meetings with Lebanese officials to discuss the economic aid for Lebanon agreed at the CEDRE support conference last year.

Hollande had arrived Wednesday in Beirut and met with Prime Minister Saad Hariri who threw a banquet in his honor.

Discussions between the two touched on the situation in Lebanon, Hariri's media office had said.

In a welcoming speech, Jumblat said the Syrian regime refused to acknowledge the rights of the Syrian people and that Hollande was the only president who supported their uprising.

For his part, Hollande said: “You represent a model to the world because you have succeeded in establishing security and unity.”