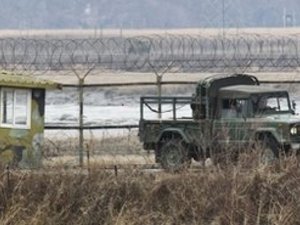 The U.S. still believes the "fully verified denuclearization" of North Korea is possible by the end of President Donald Trump's "first term," a senior official said Thursday, despite warnings a key rocket launch site appears to have resumed operations.

The specialized website 38 North and the Center for Strategic and International Studies used commercial satellite imagery to track construction at the site -- which they said began before last week's aborted summit in Hanoi between Trump and North Korea's Kim Jong Un.

Images taken on March 6 showed that a rail-mounted structure to transfer rockets to the launching pad appeared to have been completed and "may now be operational."

Cranes have been removed from the pad, while progress also appeared to have been made on rebuilding the support structure for a rocket engine testing stand.

"Given that construction, plus activity at other areas of the site, Sohae (Satellite Launching Station) appears to have returned to normal operational status," 38 North's report said.

The news will compound the White House's frustration over the lack of progress on talks with the North, following the collapse of a second Trump-Kim summit without so much as a joint statement, let alone an agreement on nuclear disarmament.

The official confirmed that Washington would seek from Pyongyang "clarifications on the purposes" of rebuilding the site.

"We don't know why they are taking these steps," the official said, requesting anonymity.

Kim had agreed to shutter Sohae at a summit with the South's President Moon Jae-in in Pyongyang as part of confidence-building measures, and satellite pictures in August suggested workers were dismantling the engine test stand.

Trump equivocated when asked Thursday if he was disappointed about the news. "We'll see," he said. "We'll let you know in about a year."

The president had declared that it was "too early" to tell if a previous report about activity at the site was true, but said he would be "very, very disappointed in Chairman Kim" if the intelligence checked out.

U.S. media had speculated over whether Trump might tighten the thumbscrews on Pyongyang following the Vietnam summit, by ratcheting up an already crippling sanctions regime.

Palladino would not say if Washington had been in contact with Pyongyang over Sohae, situated on North Korea's northwest coast, or the aborted summit.

And despite the apparent setback, the senior official insisted "we still believe this (denuclearization) is all achievable within the president's first term." Unless re-elected, Trump's term will end in January 2021.

"We have sufficient time," the official said, without mentioning a deadline for reaching an agreement so the goal could be met.

"Where we really need to see progress and we need to see it soon is meaningful and verifiable steps on denuclearization as quickly as we can," the official added, while stressing that the US side was pushing an all-in strategy for a final deal.

"Nobody in the administration advocates a step-by-step approach. In all cases, the expectation is a complete denuclearization of North Korea as a condition for all the other steps being taken."

Pyongyang used the site in 2012 and 2016 to launch satellites, a maneuver Western experts believe informs its development of inter-continental missiles capable of striking the United States.

Pyongyang's top ally, China, said Friday that the Trump-Kim summit had been an "important step" toward denuclearization on the peninsula but that the issue "cannot be solved overnight."

"All parties must have reasonable expectations, and should not set the bar too high at the outset, or make unilateral, unrealistic demands," Foreign Minister Wang Yi told reporters.

An analysis by two experts at CSIS said the rebuilding of the launch facility amounted to a "snapback" from the moderate dismantlement North Korea performed after Trump's first summit with Kim in Singapore last year.

They called the North Korean actions "an affront to the president's diplomatic strategy" that also showed Pyongyang's "pique" over Trump's refusal to lift sanctions.

They noted that the activity has continued despite Trump's conciliatory words about Kim since the Hanoi summit, and a US decision to cancel annual large-scale exercises with South Korea that the North has objected to.

The exercises were replaced with a shorter exercise that kicked off this week in South Korea to criticism from the North.