On N. Korea, Trump Clings to 'All or Nothing' Strategy 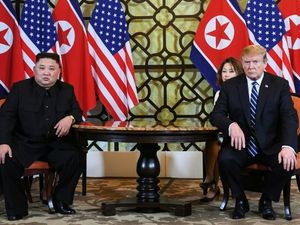 In Hanoi, Donald Trump overturned the widely held assumption he would be willing to settle for an interim agreement on North Korea's denuclearization.

But despite the breakdown of the summit and the atmosphere of skepticism that now abounds, the US president seems determined to stick with his "all or nothing" approach, betting on his personal "chemistry" with Kim Jong Un to save the day.

Trump insisted Friday his relationship with Kim "remains good" even as his aides attempted to paper over the collapse of the high-stakes second summit which concluded last week without even a modest deal on reducing Pyongyang's nuclear program in exchange for sanctions relief.

"Nobody in the administration advocates a step-by-step approach," a senior State Department official told reporters this week.

In other words, Washington wants what administration officials have called a "big deal" -- "the complete elimination of their weapons of mass destruction program," the State Department official said.

In return, Washington would ease the pain of the crippling sanctions that have strangled the isolated North's economy.

"It really seems there's an all or nothing approach right now from the administration," Frank Aum, a former advisor to the Pentagon, said at a recent meeting hosted by the United States Institute of Peace (USIP).

"That seems to be backtracking" which "the Kim regime would not be very happy about," Aum added.

It's a position that has taken many observers by surprise given how, in the run-up to the summit, the administration dropped numerous hints it was willing to take a more incremental approach to the talks.

"In no rush" was how Trump repeatedly described his stance -- a position echoed by his Secretary of State Mike Pompeo, who emphasized: "We’ve always known this would be a long process."

The administration's point man on North Korea, Stephen Biegun, said the US would be prepared to pursue commitments "simultaneously and in parallel" while suggesting there was room for maneuver when it came to sanctions.

That created the impression that Washington could be willing to countenance the step-by-step disarmament and sanctions relief sought by Pyongyang.

But when Kim proposed dismantling the Yongbyon nuclear complex in exchange for lifting the main sanctions, Trump refused.

"It has very much been characteristic of past negotiations to take an incremental approach to this that stretches it out over a long period of time, and quite honestly, has failed on previous occasions," the senior State Department official said.

In Washington, the new line has been interpreted as a victory for National Security Advisor John Bolton, long a hawk on North Korea, over Pompeo and Biegun.

Even as Washington increasingly turns its attention toward next year's presidential election, the administration exhumed a goal that has long been buried and seen as unrealistic by experts: the total denuclearization of North Korea by the end of Trump's term in 2021.

For Jenny Town of the 38 North think tank, the lack of even a partial accord has meant "we have lost that momentum" created by last year's rapprochement.

Satellite imagery analyzed by her organization revealed that Pyongyang has begun rebuilding a long-range rocket launch site it had promised to dismantle, and North Korea's official news agency has now overtly blamed the US for the failure of the summit.

The "all or nothing" approach has "always failed because (of) two mutually distrustful actors," Town said at a recent conference.

The Kim dynasty has long seen nuclear weapons as a security guarantee against what it perceives as the hostile, bellicose intentions of the United States.

"What this administration tries to do is to show that there is no hostile intent," Joseph Yun, a former US special representative for North Korea policy, said at the USIP meeting.

"But that's a tough thing to prove and we're kind of stuck at that, which is why the North Koreans are asking that we go on a step-by-step approach to have a better foundation on that trust fact."

So what next? Washington hopes to resume working-level talks as soon as possible, and has reacted in a measured way to revelations about the rebuilding of the rocket test site.

US officials say the main goal for now is to make sure the North Koreans do not resume testing in any way, including of space launch vehicles.

Trump is even ready for a third summit -- he is convinced, as ever, that his personal relationship with Kim will be the difference at the end of the day.