Pompeo to Visit Netanyahu before Israeli PM Heads to Washington 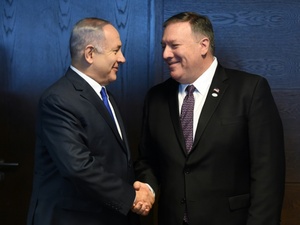 Locked in a tough re-election campaign, Israeli Prime Minister Benjamin Netanyahu this week will host a visit from the US Secretary of State Mike Pompeo before flying to Washington for a possible meeting with President Donald Trump.

But Pompeo's Jerusalem visit -- sandwiched by additional stops in Kuwait and Beirut -- reflects a larger agenda than simply lending US support to an important regional friend at a key time.

"The common thing in each of those places is helping those countries bolster their efforts to push back against the Islamic Republic of Iran," Pompeo recently told Fox News.

The Trump administration has made its struggle against Iran's "destabilizing influence" a key plank in its regional policy. On a lengthy Middle Eastern trip in January, Pompeo urged "unity" against Iran. The administration then organized a conference in Poland to attempt -- with scant success -- to enlarge its anti-Iran "coalition."

On his upcoming Beirut visit, Pompeo will focus on the Hizbullah movement, which the US considers a pro-Iranian "terrorist" group even though it is represented in the coalition government of Lebanese Prime Minister Saad Hariri, himself a US ally.

And with Israel as one of the most outspoken members of the anti-Iranian grouping assembled by the US, Iran is sure to be a central focus of Pompeo's talks this week in Jerusalem.

The US diplomatic chief "will reaffirm both privately and publicly during that visit our unwavering commitment to Israel's security and its right to self-defense," a senior State Department official said.

Netanyahu is struggling to keep his grip on power as he faces allegations of bribery, fraud and breach of trust, with legislative elections fast approaching on April 9. He undoubtedly is looking forward to the show of US support.

But Washington insists it is not interfering in Israeli politics.

Pompeo will be meeting Netanyahu "as the head of government in Israel," the senior official explained. "We have major US interests with Israel. Those interests don't go away. They don't go into suspension because of the electoral cycle."

For that reason, the official added, Pompeo has no plans to meet with Netanyahu's rivals, including former military chief of staff Benny Gantz and ex-finance minister Yair Lapid, who together formed a centrist alliance to challenge the prime minister.

Yet Trump has made clear that Netanyahu's legal problems have not lowered his opinion of the man, saying last month that the prime minister was doing "a great job" and was "tough, smart and strong."

So while the Republican president has alienated many of America's traditionally close allies, his relationship with Israel seems unshakable.

- A shift on Golan Heights -

The Trump administration has the closest ties to Israel in years. The president has confirmed that relationship in ways both symbolic and concrete: breaking with most of the world to recognize Jerusalem as Israel's capital, and cutting off essential aid to Palestinians.

Washington has taken a series of small steps deemed so "hostile" by the Palestinian Authority that it now refuses any contact with the US administration.

The last step was a shift in terminology from referring to Syria's Golan Heights not as "Israeli-occupied" but as "controlled" by the Hebrew state -- a semantic shift seen by some as a prelude to US recognition of Israeli sovereignty over the strategic plateau.

To capitalize on Trump's popularity among Israelis, Netanyahu will travel to Washington in the last week of March for the annual conference of the American Israel Public Affairs Committee (AIPAC), an event sponsored by the influential lobbying group that draws thousands each year.

While a meeting has not been officially confirmed, Netanyahu hopes to use the opportunity of his Washington visit to meet with Trump in what would be a distinctly high-profile photo op coming just weeks before the Israeli legislative elections.

That April 9 vote will also start the countdown for the presentation, expected before summer, of the Israeli-Palestinian peace plan that a small White House team -- strongly pro-Israeli, analysts say -- has been quietly preparing under the president's son-in-law, Jared Kushner.