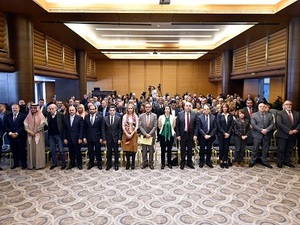 Progressive Socialist Party leader ex-MP Walid Jumblat noted Monday that “the return of Syrian refugees will not happen as long as the Syrian regime continues to reject it.”

“These people have fears,” Jumblat pointed out on the sidelines of a PSP seminar titled “Lebanon and the Syria Refugees: Rights, Concerns and Return Diplomacy”.

“Who will guarantee a safe return for them so that they don't get tortured and killed when they return?” he asked.

And voicing support for the Russian initiative on the repatriation of refugees, the PSP leader said Moscow should “offer guarantees.”

For the charlatan dwarf bigot who was calling for the immediate return of the Syrian refugees and pointing the finger everywhere but to the true culprits, should've just watched what the Russian ambassador to Lebanon Alexander Zasypkin said on al-Manar of all places. Zasypkin all but blamed the Syrian regime for the failure of the Russian plan to repatriate the refuges and he should know.

The KSA and western plan is simple, the refugees will not return to Syria under any circumstances, they will become citizens of Lebanon and thus increasing the Sunni population and becoming a threat to the Shia and Christians in particular Hizballah.

The west and KSA have no say on the matter because they don’t control Syria. Bashar does. All he needs to do is ask them to come back. He doesn’t want them.... and he with his Shia Terrorist accomplices for them to flee to Lebanon, Jordan and Turkey.

The Shia shot themselves in the foot when they defended bashar, it’ll cost them in the long run....