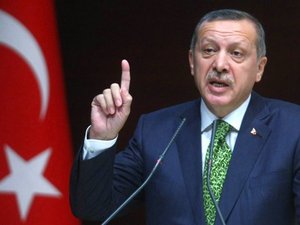 Four former police chiefs were among those convicted by a court in Istanbul for "attempting to topple the Turkish government", the official Anadolu news agency reported.

The affair that sparked the trial involved tape recordings that purportedly implicated Erdogan, who was prime minister at the time, and several of his ministers.

It created one of the biggest challenges for the Turkish leader and forced three members of his cabinet to quit.

But Erdogan called the tapes a "fabrication", accusing US-based Muslim cleric Fethullah Gulen of contriving a scandal to topple him.

His government dismissed thousands of police officers and hundreds of judges and prosecutors running the corruption case. Nearly 70 people subsequently went on trial.

On Monday, the Istanbul court also handed out jail sentences to other defendants for "membership of an armed terror group" and "illegal tapping", Anadolu reported.

Erdogan's government also blames Gulen and his followers for the failed July 2016 coup, something Gulen has strongly denied.

Turkish authorities have launched a mass crackdown in the wake of the failed coup.

They detained tens of thousands of people over alleged ties to Gulen and sacked or suspended more than 140,000 public sector workers.