Bassil Reportedly Only Minister to Accompany Aoun to Moscow 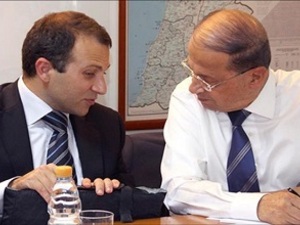 President Michel Aoun has agreed with Foreign Minister Jebran Bassil that he would be the only minister to accompany him on his first official visit to Russia on March 26, a media report said.

“Aoun's picking of Bassil exclusively and the decision not to form a delegation as per custom might be linked to the intention of the president and the foreign minister to keep their discussions with the Russian officials under wraps,” MTV reported on Tuesday.

Speaking to MTV, unnamed sources did not rule out that the visit could be linked to “the calculations of the presidential race, in which Moscow will certainly be a key player.”

“Accordingly, the visit might represent an opportunity to strengthen Bassil's relation with the Russian leadership,” the sources added.

Haha haha the spoiled brat gets to hold his daddy in law’s hand whilst traveling to the big big boss, Vladimir Putin. This reminds me of when Jumblatt took his son Taymur on a regional tour.

what do you expect its a family affair after all...

what do you expect its a family affair after all...

Mario Aoun of the FPM: “Minister Bassil’s remarks should have been voiced and PM Hariri, who formed the (Brussels conference) delegation, committed some sort of mistake when he failed to ask the relevant minister to accompany him to Brussels.”

The double standards of this 'strong' mafia party are nauseating.

He was forced to become a minister and now he is forced yet again to accompany the strong president.

Yeah... I bet he was forced to be "designated" President of his party as well...