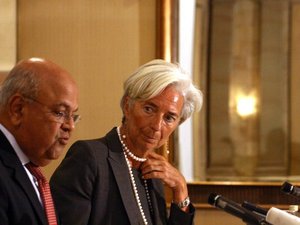 "South Africa's recent economic performance has been impressive. Good macroeconomic policies which, together with a flexible exchange rate and sound financial sector, have mitigated the output drop during the global recession," she said in a statement.

"The challenge now is to ensure that monetary policy remains supportive and competitiveness improves. At the same time, moderation in wage growth and enhanced competition would support the ongoing recovery and lay the foundation for higher growth in the medium term," she said.

South African labor unions regularly stage strikes to demand increases of more than double the rate of inflation, a trend that business leaders warn is unsustainable.

On Friday, Lagarde cautioned that the Eurozone debt crisis was taking a toll on Africa and the rest of the world, with the IMF set to release a report around January 25 that is likely to lower the global growth forecast from the 4.0 percent estimated in September.

"In these difficult times for the global economy, emerging economies are a key part of the solution," she said in her statement.

South Africa has an important role to play on behalf of the interests of developing economies and the African continent in particular."

South Africa fell into its first recession since the fall of apartheid during the 2008 global financial crisis.

While the recession lasted only nine months, the country has struggled to boost its growth rate to levels that the government says are needed to make a dent in a 25 percent unemployment rate that keeps 38 percent of the population living in poverty.