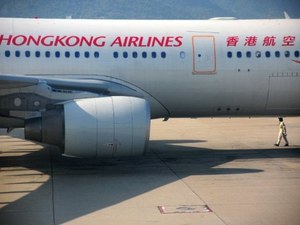 Airbus and Hong Kong Airlines have struck a deal worth about $3.8 billion at list prices to buy 10 superjumbo A380 jets, reports said.

The European aircraft manufacturer plans to deliver the first A380 to the Chinese airline in 2015, Bloomberg said, citing Kenneth Thong, head of corporate governance and international affairs at the carrier.

The Chinese government had been threatening to block the order because of Beijing's objections to the European Union's carbon emissions trading scheme, said the Financial Times, which said the deal had nevertheless been done.

"We have no comment regarding our order intake before our annual press conference on January 17," a Singapore-based spokesman for Airbus told Agence France Presse, adding that the press conference was not related to any specific order.

The airline, which is backed by the HNA Group, could not be reached for comment on Saturday, but the FT said it was expected to get a "significant discount" on the list price.