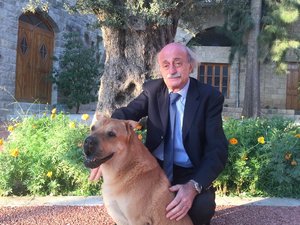 The PSP leader had recently posted a picture of Oscar at a veterinary hospital, which went viral shortly after publishing.

Expressing his love for dogs, Jumblat has recently condemned an incident in which dozens of stray dogs were deliberately poisoned in Ghobeiri.

“If there is a creature who reminds us of our humanity and teaches us loyalty, love and tenderness it would be the dog,” Jumblat said.

haha it certainly is. he was combed for the occasion!

Actually, it is more like : nassrallah in the foreground and junblatt in the background.