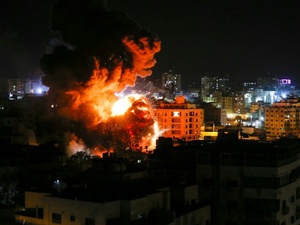 Prime Minister Benjamin Netanyahu said Tuesday he was prepared for further military action in Gaza after cutting short a Washington visit and returning to Israel following a shaky ceasefire announced by Hamas.

After Hamas said Egypt had brokered a truce late Monday aimed at ending a severe escalation, further exchanges of fire occurred throughout the night before calm again returned at around 6:00 am (0400 GMT).

Gaza and Israeli cities near the Palestinian enclave remained quiet throughout the day.

U.N. envoy for the Middle East Nickolay Mladenov told the United Nations Security Council that a "fragile calm" had returned but the situation remained "extremely tense."

There were no deaths on either side, but seven Israelis and seven Palestinians were wounded in the flare-up at a highly sensitive time ahead of Israel's April 9 elections.

Speaking via satellite link to pro-Israel lobby AIPAC's annual conference after returning from Washington, where he met U.S. President Donald Trump, Netanyahu said "we are prepared to do a lot more."

"We will do what is necessary to defend our people and to defend our state," he said after Israeli retaliatory strikes in response to a rare long-distance rocket attack that hit a house near Tel Aviv.

Later, the army said that after a situation assessment with Netanyahu, military chief of staff Lieutenant General Aviv Kohavi ordered that support forces to the brigade be sent to the southern region.

Kohavi also "approved completing the summoning of additional reserve soldiers," a statement from the military read, without providing further details.

The prime minister is widely believed to want to avoid a fourth war in Gaza since 2008 with unpredictable consequences ahead of the elections, but he is also under heavy political pressure.

Israel kept up air strikes on Gaza into the pre-dawn hours of Tuesday and Palestinian militants launched new rockets despite the ceasefire claim.

Israel struck around 15 fresh targets, including what the army said was a Hamas military compound and an Islamic Jihad position.

A security source in Gaza said there had been a total of around 80 Israeli strikes.

Some of the rockets fired at Israel were intercepted by air defenses while others hit uninhabited areas, the army said.

A house in the southern Israeli town of Sderot was damaged by a rocket.

In Gaza, Raed al-Qahtawi, whose home was damaged in an Israeli strike on Hamas leader Ismail Haniya's office, said he received a warning call from Hamas authorities beforehand.

"We were sitting in the house and then they called us and told us to clear the house immediately," he said.

Schools and government offices were closed in Gaza on Tuesday, while schools in parts of southern Israel were also closed.

Israel warned of a strong response, sending reinforcements to the Gaza area and announcing a limited call up of reservists.

It also closed its people and goods crossing with the blockaded strip and reduced the zone in the Mediterranean it allows for Palestinian fishermen.

Israel targeted dozens of Hamas sites, including Haniya's office, what it said was a secret intelligence building and a Hamas internal security building in Gaza City.

The coastal enclave was rocked by explosions and fireballs rose in the sky in Gaza City.

Netanyahu said it was the largest-scale attack on Hamas sites since the last war between them in 2014.

Following those strikes, militants in Gaza fired a barrage of rockets in response and air raid sirens wailed in southern Israel.

A joint statement from militant groups in Gaza, including Hamas and Islamic Jihad, took responsibility for those rockets.

Hamas then announced Egypt had brokered the ceasefire -- as it has repeatedly in the past -- but Israel did not confirm it.

Israeli media quoted an unnamed official saying Israel had not accepted any ceasefire.

Israel's army blamed Hamas for the rocket that hit the house Monday in the community of Mishmeret, around 20 kilometers (12 miles) north of Tel Aviv.

A Hamas official however denied the group was responsible for that rocket and indicated it may have been fired by accident or even due to "bad weather."

The hospital that treated the wounded said the seven Israelis were injured lightly by burns and shrapnel, including three children.

If Israel and Hamas manage to implement the ceasefire announced Monday, more tensions are likely on the horizon.

Saturday marks the one-year anniversary of protests and clashes along the Gaza-Israel border, and large demonstrations are expected for it.