Obama Vows to do 'Whatever it Takes' to Grow Economy 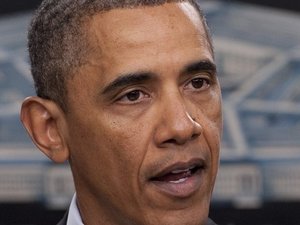 U.S. President Barack Obama promised Saturday to do "whatever it takes" to maintain growth in the U.S. economy as he announced a summit with business leaders dedicated to job creation at home.

"This year, I'm going to keep doing whatever it takes to move this economy forward and to make sure that middle class families regain the security they've lost over the past decade," Obama said in his weekly radio and Internet address.

"That's my New Year's resolution to all of you," he added.

The comments came after new government statistics showed U.S. unemployment had fallen for the fourth straight month in December and jobs creation picked up.

The jobless rate is the lowest since February 2009, the month after President Barack Obama took office amid the worst U.S. recession in decades.

As recently as August the rate stood at 9.1 percent, and economists cheered the new numbers as evidence that economic growth, feeble throughout much of 2011, was gaining traction.

Obama said the new drop in unemployment numbers showed the country was "heading in the right direction," but more needs to be done.

"And we've got to keep rebuilding our economy so that everyone gets a fair shot, everyone does their fair share - and everyone plays by the same rules. We can't go back to the days when the financial system was stacking the deck against ordinary Americans. To me, that's not an option."

The president announced that on Wednesday, the White House will host a forum called "Insourcing American Jobs," during which he will discuss with business leaders ways of bringing back home the jobs that had been "outsourced" to foreign markets.