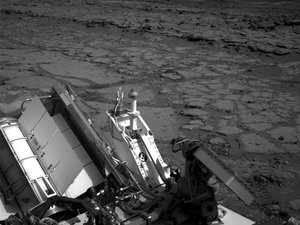 The mystery of methane on Mars may finally be solved as scientists Monday confirmed the presence of the life-indicating gas on the Red Planet as well as where it might have come from.

In the 15 years since a European probe reported traces of the gas in the Martian atmosphere, debate has raged over the accuracy of the readings showing methane, which on Earth is produced by simple lifeforms.

Because methane gas dissipates relatively quickly -- within around 12 years on Earth -- and due to the difficulty of observing Mars' atmosphere, many scientists questioned previous studies that relied on a single data set.

Now an international team of experts have compared observations from two separate spacecraft, taken just one day apart in 2013, to find independent proof of methane on our neighboring planet.

Furthermore, they conducted two parallel experiments to determine the most likely source of methane on Mars to be an ice sheet east of Gale Crater -- itself long assumed to be a dried up lake.

"Two completely independent lines of investigation pointed to the same general area of the most likely source for the methane."

Europe's Mars Express probe measured 15.5 parts per billion in the atmosphere above the Gale Crater on June 16, 2013. The presence of methane in the vicinity was confirmed by readings taken 24 hours earlier by NASA's Curiosity rover.

Using the data, Giuranna and the team divided the region around the crater into grids of 250 by 250 square kilometers.

One study then ran a million computer-modeled emissions scenarios for each section while another team studied images of the planet surface for features associated on Earth with the release of methane.

The most likely source was a sheet of frozen methane beneath a rock formation, which the team believes periodically ejects the gas into the atmosphere.

Giuranna said that while methane is a sign of life on Earth, its presence on Mars doesn't necessarily constitute evidence of something similar on the Red Planet.

"Methane is important because it could be an indicator of microbial life," he said. "But life is not required to explain these detections because methane can be produced by abiotic processes."

"Though not a direct biosignature of life, methane can add to the habitability of martian settings, as certain types of microbes can use methane as a source of carbon and energy," he added.

Though there is no liquid water on Mars, the European Space Agency said in February its imaging equipment had shown further evidence of dried up river beds, suggesting the Red Planet may once have been home to simple organisms.

Giuranna said that further research was needed to determine the extent of the methane ice sheet near Gale Crater.

If founded to be extensive, the methane it contains "could support a sustained human presence" on Mars as a possible source of fuel for industrial processes and a propellant for returning manned missions to Earth, he said.