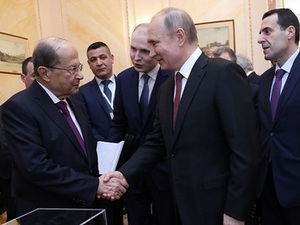 During his meeting with Russian President Vladimir Putin in Moscow last week, President Michel Aoun has reportedly raised the “nomination of his son-in-law and Foreign Minister Jebran Bassil to the post of presidency in the next elections, asking for Putin’s support,” al-Joumhouria daily reported on Thursday.

Diplomatic sources who spoke on condition of anonymity told the daily that the meeting between Aoun and his Russian counterpart, “included Bassil (Free Patriotic Movement chief), and Adviser Mireille Aoun, but excluded the Lebanese ambassador in Moscow.”

“The meeting was supposed to include the Lebanese ambassador but Bassil has removed the name from the Lebanese attendance list, confining the meeting to himself and the adviser which made it almost a closed meeting not even permissible for an ambassador to attend,” said the sources.

On the other hand, sources of the Free Patriotic Movement said “any talk about special agendas during Aoun's visit to Russia are merely unrealistic. Discussions have focused on Lebanon, the issue of the displaced and the Russian-Lebanese relations.”

OMG! Imbassil President! I cannot think of something worse for our country... The son in outlaw must be jubilating... More $$$$$....

This is the last chance for the Lebanese to start a revolution if they intend to elect him, otherwise the country is doomed for the next 100 years. What is happening now in Algeria is the best example,this is when the people rule.
Is there still a chance to do something?

Look what happened when it was claimed that the Russians intervened with the last presidential elections in the US. Is this really what the Lebanese public wants?

Riding one of Aoun's daughter makes one presidentiable. As Rami (Guest) wrote, we need a revolution but ours would certainly end up like the Syrian one.

When Aoun said that no one could accompany them to Moscow, we all knew if was fishy. Excluding Lebanese Ambassador to Russia Chawki Bou Nassar was also unacceptable but Hariri didn't even budge for a second...

Bassil as President means the end of what is left of Lebanon.. God help us all if this is the case!!!

It is time to amend the constitution to have a popular vote rather the 128 MPs. Those MPs do not represent the people but their party masters and their pockets.

Why act surprised? The writing has been on the wall for a very long time with imbecile wanting to visit Syria and calling for Syria's return to the useless League etc... On the other hand who dares say no to him? not the Lebanese populous or sheep anyway. We will have to accept what Syria and Iran want if we do not want to revolt.