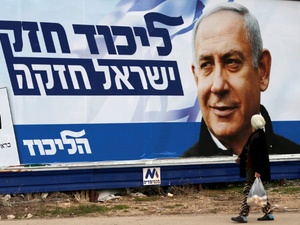 Israeli Prime Minister Benjamin Netanyahu has pledged to annex settlements in the occupied West Bank if he wins the upcoming general election.

His comments come just days before the closely-fought April 9 poll and could be seen as an appeal to rightwing voters, who do not believe in the feasibility of a peace agreement with the Palestinians.

"I will apply (Israeli) sovereignty, but I don't distinguish between settlement blocs and isolated settlements," he said in an interview with Channel 12 television.

Settlements built on land occupied by Israel in the 1967 Six-Day War are deemed illegal by the international community and their ongoing construction is seen as a major barrier to peace.

Annexation could prove to be the death knell for the two-state solution.

In an interview broadcast Friday, Netanyahu said he told U.S. President Donald Trump he would not remove settlements or people as part of a future American peace plan.

"I said there shouldn't be the removal of even one settlement" from the occupied West Bank, Netanyahu told Israel's Channel 13 television.

More than 400,000 Israelis live in West Bank settlements as part of Israel's military occupation of the territory, where more than 2.5 million Palestinians live.

A further 200,000 Israelis live in settlements in occupied east Jerusalem, over which Israel has already implemented full sovereignty.

Washington is expected to unveil proposals for Israeli-Palestinian peace sometime after Tuesday's Israeli election in which Netanyahu is seeking a fifth term.

The Israeli prime minister was asked by Channel 13 if he was familiar with the details of the U.S. plan, replying he knew "what should be in it."

Along with settlements, "our ongoing control of all the territory west of the Jordan" River was a further condition set by the Israeli premier for any U.S.-led peace initiative.

Netanyahu said he informed Trump not "even one person" would be evicted from a settlement.

The US president on Saturday was cautious about the outcome of Israel's upcoming election, calling it a close race between "two good people."

"How is the race going by the way? How is it, who's going to win the race? Tell me, I don't know," Trump asked the Republican Jewish Coalition in Las Vegas.

The latest polls place Netanyahu and ex-military chief Gantz neck and neck, but give the former the advantage in his ability to form a coalition government.

While Netanyahu has a close relationship with the U.S. president, Palestinian president Mahmud Abbas cut off relations with Washington after Trump declared the disputed city of Jerusalem Israel's capital in December 2017.

The Palestinians say the U.S. government's pro-Israel bias meant it could no longer lead peace negotiations between them and Israel, while U.S. officials argue their plan will be fair.

Israeli-Palestinian peace efforts have been at a standstill since 2014, when a drive for a deal by Barack Obama's administration collapsed.

The Americans, Russians and Iranians have done all they could to get Netanyahu reelected, will they succeed? Time will tell.

This is the beginning of the end of the Israeli Apartheid state. The West will oppose an apartheid state Especially when persons of color become a majority in America, and Arabs and Muslims double in Europe, and the Chinese economy will pass the US as America will be buried in debt when all the baby boomers retire.