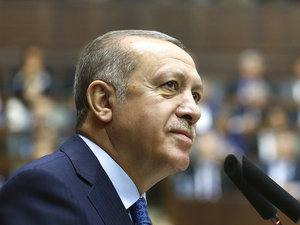 Stung by high living costs and a 2018 currency crisis, voters handed the AKP one of the party's worst setbacks after a decade and a half in power.

Now with no elections until 2023, Erdogan has room to focus on the economy, but analysts say he must convince investors already wary over his sometimes unorthodox policies, and worried about fallout from tensions with the United States.

Turkey's lira can be volatile, but analysts said Erdogan's government must balance any gains from short-term stopgaps with the need for deeper reforms for more long-term stability.

Finance Minister Berat Albayrak, also Erdogan's son-in-law, has said Turkey will enter "an economic rebalancing period" after the elections and he is set to reveal reform details next week.

Albayrak is due to meet IMF and World Bank officials in Washington April 12-14 to "shed light on the new road map" for Turkey's economy, according to the Daily Sabah newspaper.

"As concerns about the struggling economy motivated many voters’ decisions at the ballot box, Erdogan will be compelled to address its underlying problems," said Amanda Sloat at the Brookings Institute. "However, he has limited room for maneuver."

The AKP built its success on Turkey's strong growth and his supporters point to progress in living standards during Erdogan's 16 years in office.

But on Sunday, the AKP was punished in part because Turkish households were stung last year by a 30 percent slide in the lira during a diplomatic crisis with the U.S.

Once the darling of emerging market investors, economists say Turkey has lost some of its appeal as problems emerged with growth driven by foreign credit.

Turkey has slipped into recession for the first time in a decade, inflation is in double digits and economists are watching how Turkish officials will manage its recovery.

"On paper and in public speeches, the economic leadership... seems to agree reform is needed. In practice, the government's recent record is poor," said Maya Senussi, senior economist at Oxford Economics.

"The authorities have to not only admit that mistakes were made over the past year, but also signal a readiness to sacrifice growth in the short term to increase the chances of long term prosperity -- a decision the AKP has so far been unwilling to make."

Turkish officials have in the past talked up broad reforms, including a tax overhaul and measures to strengthen growth. But a major worry, analysts say, is foreign debt exposure for Turkish companies, which face more costly repayments for foreign lending because of the weaker lira.

"We see this period as an opportunity to make permanent solutions for our structural problems," Rifat Hisarciklioglu, head of Turkey's Chambers and Commodity Exchanges Union, told a meeting of business leaders on Friday, Anadolu state news agency said.

After a 2017 vote granting him broader powers as president, Erdogan is in a position to deliver reforms. But Sunday's election highlighted investor worries over how Turkey can turn to short-term fiscal expediency if required.

Before Sunday's vote, the lira fell almost 6 percent in one day after investors worried the government tapped foreign reserves to prop up the currency in the lead up to the ballot. And measures to halt lira short-selling afterwards did not help investor confidence.

"Renewed turmoil in the Turkish financial markets and heightened uncertainty regarding the policy reaction to the ongoing recession raise the risk of further capital flight," it said.

Turkish officials defend the central bank's independence, but Erdogan has demanded it lower interest rates, which he blames for high inflation. That worries investors who see political pressure on bank policymaking.

The Turkish leader has also lashed out at foreign investment banks, and blamed recent currency fluctuations on part of a US-led attempt to "corner" Turkey financially.

Finance Minister "Albayrak has to come up with a program to convince markets and importantly locals that the current management team know what they are doing, rebuilding credibility in the process," said Timothy Ash, a senior sovereign strategist at BlueBay Asset Management.

Overshadowing Turkey's economic outlook will be Erdogan's testy relations with the United States, which are already frayed by disputes over Syria, Turkey's Russian missile purchases and its arrests of U.S. diplomatic staff.

When a dispute erupted last year over Turkey's detention of a U.S. pastor, Washington swiftly imposed sanctions and tariffs on some Turkish goods, triggering the slide in the lira.

Turkey's government has said it will go ahead with a purchase of Russian S-400 missiles, despite Washington suspending Ankara's participation in the U.S.-made F-35 fighter jet program and warning of more sanctions to come.