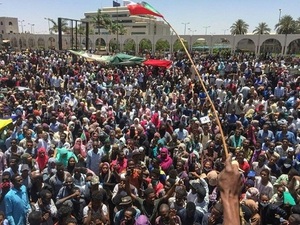 Sudanese protesters on Monday sought talks with the army on forming a transitional government, as thousands braved a deadly crackdown by security agents for a third day to urge the military to back them.

The east African country has been rocked by more than three months of protests that erupted over a hike in bread prices before transforming into nationwide demonstrations against President Omar al-Bashir's iron-fisted 30-year rule.

At the biggest rally so far, thousands of protesters have since Saturday been camped out around the army headquarters in Khartoum which also houses Bashir's residence and the defense ministry.

They are calling on the military to protect them and to back calls for Bashir to resign.

"When the army is here, we have no fear," protesters flashing victory signs chanted as military vehicles with soldiers fanned out around the complex, onlookers said.

Riot police have fired tear gas at the protesters, but they have failed to dislodge them.

Officials say 38 people have died in protest-related violence since December.

Interior Minister Bushara Juma said seven protesters died on Saturday when forces tried to disperse them and 15 were wounded along with 42 members of the security forces. In all, 2,496 protesters were arrested.

"Sudan's armed forces understand the reasons for the demonstrations and is not against the demands and aspirations of the citizens, but it will not allow the country to fall into chaos," Ibnouf told the top brass at a meeting, according to the official SUNA news agency.

"History will not forgive if the armed forces let the country lose its security."

The group spearheading the protests on Monday appealed to the army for talks on forming a transitional government.

"We call on the Sudanese armed forces to talk directly with the Alliance for Freedom and Change for facilitating the peaceful process of forming a transitional government," said Omar el-Digeir, a senior member of the group.

Digeir said the protest organizers had also formed a council to initiate talks with security forces and the international community aimed at agreeing a transition that gives power to a "transitional government that represents the wish of the revolution."

"We reiterate our people's demand that the head of the regime and his government have to immediately step down," Digeir said.

Reading from a statement, he also called on the armed forces "to withdraw their support for a regime that has lost its legitimacy" and to support the "people's alternative for a transition to a civilian democratic government."

Since protests erupted across Sudan in December agents of the powerful National Intelligence and Security Service (NISS) and riot police have cracked down on demonstrators, but the army has not intervened.

Soldiers put up barricades in streets near the army compound after reinforcements of intelligence agency members and riot police arrived in the early hours, witnesses told AFP.

"After that, security forces began firing tear gas at protesters," one said on condition of anonymity.

Gunshots were also heard, witnesses said, but it was unclear who fired.

Some activists on the ground said it was the army shooting in the air, but this could not be confirmed independently.

Protest organizers urged the military to protect the demonstrators.

"We want you, the young officers and soldiers, to remain committed to the role of the national army, which is of protecting the people," said the Sudanese Professionals Association.

Protest organizers urged the residents of Khartoum and nearby areas to join the demonstrators.

Crowds of people carrying food and water were later seen walking towards the complex to take part in the protest, according to onlookers.

Some companies have told employees not to come into work "until further notice".

The rally outside the army headquarters has been the largest since protests began on December 19 in the central town of Atbara, quickly spreading to the capital and towns and cities across the east African country.

The European Union said an "unprecedented" number of people had come out calling for change since Saturday.

"The people of Sudan have shown remarkable resilience in the face of extraordinary obstacles over many years," the EU's External Action Service said.

"Their trust must be won through concrete action by the government."

The protesters accuse Bashir's administration of economic mismanagement that has led to soaring food prices and regular shortages of fuel and foreign currency.

Sudan's security council on Sunday said the demands of the protesters "have to be heard" after a meeting chaired by the veteran leader.

Bashir, wanted by the Hague-based International Criminal Court for alleged war crimes and genocide in the conflict-wracked region of Darfur, swept to power in an Islamist-backed coup in 1989.

Here is your Islamic Arab leader....
Bashir, wanted by the Hague-based International Criminal Court for alleged war crimes and genocide in the conflict-wracked region of Darfur, swept to power in an Islamist-backed coup in 1989.