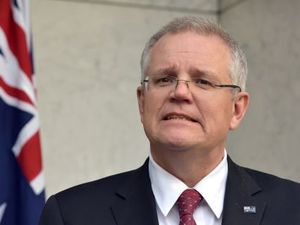 Australia's prime minister on Thursday called a national election for May 18, firing the starting gun on what promises to be a bareknuckle campaign focused heavily on climate and the economy.

The vote will decide whether the conservative government gets a rare third term in office -- and whether embattled incumbant Scott Morrison can beat the odds and hang on to power.

But Australian elections are often tight affairs, with a couple dozen marginal seats deciding the outcome, and both party leaders have low approval ratings and have struggled to connect with voters.

Morrison took office less than a year ago in a coup by the hard right of his Liberal party and has struggled to bridge a divide between party moderates and nationalist populists who have grown in confidence in the age of Donald Trump.

He has tried to paper over these divisions and make sure the campaign focus is squarely on the party's economic record.

"We live in the best country in the world," Morrison said making the election announcement in Canberra. "Our future depends on a strong economy."

"Who do you trust to deliver that strong economy?" he asked.

For all purposes, campaigning is already well underway and has already been deeply acrimonious.

Election ads have been running for weeks, and -- like the United States -- Australian politics has taken on the air of a permanent campaign with the focus on how policies will play with voters as much as how well they work.

Since then, any opportunity in front of a camera or microphone has been an opportunity to repeat the claim that a high-tax Labor government would destroy jobs and businesses.

In truth, after 27 years of growth, the Australian economy is facing increasing headwinds, and whoever wins power is likely to contend with slower growth, rising unemployment, falling revenues and wobbly housing and commodities markets.

Labor for its part has zeroed in on centrist voters frustrated that they elected a moderate in former prime minister Malcolm Turnbull only for the Liberals to swap horses midstream to the more hardline Morrison.

Shorten has tried to paint his opponents as culturally out of touch and promised the coal-rich country will shift to electric cars and renewable energy.

"This election is very straightforward," he said. "It is about being stuck in the past or a bright future and a positive view of what Australians can do together."

"What we need to do is make sure this country is working in the interests of everyone, not just the top end of town."

The 50-year-old prime minister's policies on climate change and immigration are deeply unpopular, but coalition partners and hardliners within his party have forestalled any shift to the centre.

The environment is not just an issue in the wealthy suburbs.

Farms -- always hard to run on the country's difficult soil and in its unforgiving climate -- now have to contend with record droughts, followed by brutal bushfires, followed by record floods.

But Morrison will be hoping that conservative rural voters, urban voters frustrated with more crowded and more expensive cities and a combative campaign can carry him over the line.

His fate may hinge on the ability of the Liberal party and Australia's powerful conservative media to paint Shorten as untrustworthy.

Minor parties may also play a significant role, thanks to Australia's system of compulsory ranked votes.

A crop of centrist independent women candidates have done well in recent by-elections, while running a message of unapologetic multiculturalism and action on climate change.

Revelations that Pauline Hanson's far-right One Nation party offered to change Australia's popular gun restrictions in return for millions of dollars from the US National Rifle Association could also have a major impact.

Following the scandal Morrison reluctantly told Liberal voters to award their crucial second preference votes to Labor above Hanson, a move that could boost Labor and see him lose One Nation votes.

But Morrison's party has been buoyed by a surprise victory in recent regional elections in the populous state of New South Wales.

"They are also more hopeful of at least limiting their losses in Western Australia."

"But Victoria remains a nightmare for them, looking so bad as to preclude any winning scenario that doesn't involve them hanging on as an unstable minority government."