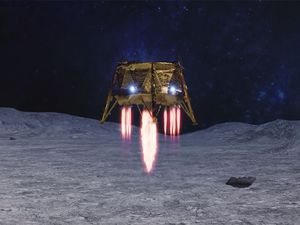 Israel's attempt at a moon landing failed at the last minute Thursday when the craft suffered an engine failure as it prepared to land and apparently crashed onto the lunar surface.

"We didn't make it, but we definitely tried," project originator and major backer Morris Kahn said in a live videocast from mission control near Tel Aviv.

"The spacecraft Beresheet did not successfully complete its landing on the moon," an onscreen message said.