Algeria Protests Defy Police to Keep Up Pressure on Regime 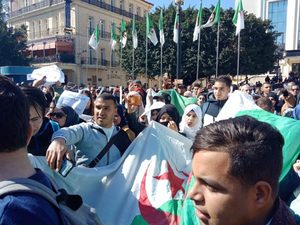 Algerian police tried but failed to disperse protesters gathered for the first Friday protests since the announcement of presidential elections to succeed ousted leader Abdelaziz Bouteflika.

There was no violence as riot police, clad in helmets and carrying shields, attempted to clear the principal protest site outside the landmark main post office in central Algiers.

Dozens of police, in their first such operation at the site, were encircled by hundreds of demonstrators, called to protest against alleged manoeuvring by the regime to stay in power.

The crowd, shouting "silmiya, silmiya" (peaceful, peaceful)", cleared a path for the police to pull back as the demonstrators urged the officers to join their protest.

"We feel there is some tension this Friday, there are a lot of police," said Karima Bourenane, 36, who turned up with her daughter. "I hope the demonstration will stay peaceful."

Social media, the source of mass protests which led to the end of Bouteflika's two-decade rule, have been filled with calls for an eighth consecutive Friday of demonstrations, this time under the slogan of "They will all leave."

Presidential elections are to be held on July 4, interim leader Abdelkader Bensalah's office announced on Wednesday, just hours after he pledged "transparent" polls.

The new date was set a day after Bensalah assumed office for a 90-day period, as stipulated by the constitution but much to the ire of demonstrators.

The appointment of upper house speaker Bensalah as Algeria's first new president in 20 years has failed to meet the demands of demonstrators.

Although 77-year-old Bensalah is barred under the constitution from running in the upcoming election, protesters have nonetheless pushed for the close Bouteflika ally to step down.

Students and magistrates have called for renewed rallies and marches in the capital and other cities across the North African country.

"I'm not going to vote. What for?" asked Walid.

For the first time since the anti-Bouteflika protest movement was launched in mid-February, police vehicles and forces tried to block off access to the post office.

But young protesters were undeterred.

"We will be out in large numbers, very large. They don't know what's coming. They won't be able to do anything against us," said Yassine, 23.

For Mahrez Bouich, a philosophy professor at the University of Bejaia, east of Algiers, "the July 4 election has already been rejected by the people, which also refuses Bensalah's nomination".

The demonstrators argue that elections cannot be free and fair if they are held under the same judicial framework and institutions as those of the Bouteflika regime.

Bensalah has received the implicit support of the army whose chief General Ahmed Gaid Salah withdrew his backing for Bouteflika, prompting his resignation on April 2.

But the general has stood up for the defence of Algeria's institutions and warned against the "unrealistic slogans" of protesters aiming to sweep away the whole ruling system.

All eyes are now focused on the turnout on the streets on Friday, the traditional day of protests in Algeria, and whether the authorities will adopt a tougher line and step up security measures.

For the first time in the wave of demonstrations which have swept Algiers, police fired tear gas and water cannons on Tuesday to try to disperse a protest by students.

But Mohamed Hennad, a political sciences professor at the University of Algiers, said "the balance of forces will favour the street if it's a large mobilisation on Friday" as in past weeks.