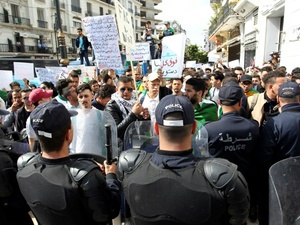 The head of Algeria's constitutional council stepped down Tuesday after weeks facing the ire of protesters, state television reported.

Tayeb Belaiz informed the council, which will play a key role in upcoming presidential elections, that "he presented his resignation... to the head of state."

Algerians have called for Belaiz and other top figures to quit in mass demonstrations which prompted the departure of veteran president Abdelaziz Bouteflika earlier this month.