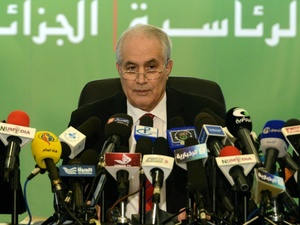 The head of Algeria's constitutional council stepped down Tuesday after weeks facing the ire of protesters, state television reported.

Tayeb Belaiz informed the council, which will play a key role in upcoming presidential elections, that "he presented his resignation... to the head of state".

Algerians have called for Belaiz and other top figures to quit in mass demonstrations which prompted the departure of veteran president Abdelaziz Bouteflika earlier this month.

Protesters have targeted the "3B" -- Belaiz, Prime Minister Noureddine Bedoui, and Abdelkader Bensalah who served as upper house speaker until being appointed interim president after Bouteflika's resignation.

Bensalah has defended his appointment under constitutional rules and has pledged a transparent vote, to be held on July 4.

The constitutional council is tasked with vetting election candidates, as well as ensuring the regularity of the polls.

Belaiz has served as a minister almost without interruption for 16 years and was appointed head of the constitutional council for the second time on February 2.

Later that month Algerians took to the streets to rally against Bouteflika's bid for a fifth term in polls initially schedule for April.

The demonstrations swelled and spread nationwide, with protesters calling for a broad overhaul of the political system following the president's departure.