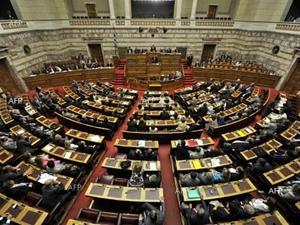 Greece's parliament on Wednesday began debate on a resolution to demand the payment of German war crime reparations, an issue long disputed by Berlin.

"These demands are always active. They were never set aside by Greece," parliament chairman Nikos Voutsis told reporters this week.

The chamber is expected to approve later Wednesday, with cross-party support, a resolution calling on the government of Premier Alexis Tsipras "to take all the necessary diplomatic and legal steps to claim and fully satisfy all the demands of the Greek state stemming from World War I and World War II".

A parliamentary committee last year determined that Germany owes Greece at least 270 billion euros ($305 billion) for World War I damages and looting, atrocities and a forced loan during the Nazi occupation in World War II.

Reclaiming war reparations has been a campaign pledge by Tsipras since 2015. He faces multiple electoral challenges this year, with his party trailing in polls.

During a visit to Greece in January, German Chancellor Angela Merkel said her country "recognised its historical responsibility."

"We recognise our historical responsibility. We know how much suffering we, as Germany in the time of Nazism, have brought to Greece," she said.

In 2014, ex-president Joachim Gauck had also sought public forgiveness in the name of Germany from relatives of those murdered by the Nazis in the mountains of northern Greece.

But when it comes to actual payments, Berlin has always insisted that the issue was settled in 1960 in a deal with several European governments.

During the Greek economic crisis, there was further tension in Athens over draconian EU austerity and bailout terms seen to be imposed by Berlin hardliners.

Relations have improved over the last three years after Tsipras' government endorsed conditions linked to satisfying its creditors.