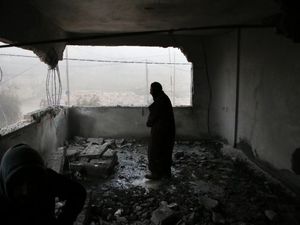 Israeli forces destroyed two apartments in the occupied West Bank on Friday that housed the family of a Palestinian accused of killing an Israeli woman in February, the army said.

Soldiers surrounded the apartment block in the flashpoint southern city of Hebron beginning late on Thursday.

They then destroyed the two apartments that were home to the family of Arafat Irfaiya, 29, with the use of heavy construction equipment in the early hours of the morning.

Some clashes broke out between Palestinian residents and Israeli forces during the operation, AFP journalists reported.

Her body was found on February 7 in a forest southeast of Jerusalem and Irfaiya was arrested two days later in a raid in the West Bank city of Ramallah.

Israeli authorities labelled it a "nationalist" attack, meaning linked to the Israeli-Palestinian conflict.

Israel routinely demolishes the homes of Palestinians accused of attacks on Israelis as part of a policy it says discourages future violence.

But human rights groups and Palestinians say the practice amounts to collective punishment, with family members forced to pay for the acts of a relative.