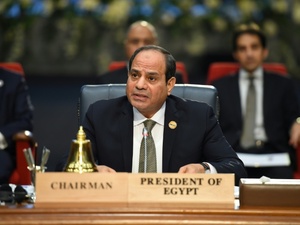 Egyptians were voting Saturday in a referendum that aims to cement the rule of President Abdel Fattah al-Sisi, the former coup leader who presents himself as a rock of stability in a turbulent region.

Despite protests from human rights groups, the three-day plebiscite is expected to approve sweeping constitutional changes that will extend Sisi's rule of the Arab world's most populous country until at least 2024.

Beyond that, the amendments would allow Sisi, 64, to run for another six-year term while boosting his control over the judiciary and giving the military even greater influence in political life.

Sisi himself was among the first to vote when polls open, casting his ballot in the upmarket Cairo suburb of Heliopolis.

In Shubra, a working-class neighbourhood of the capital, dozens of voters, mostly women carrying their children, queued outside a polling station in the local high school.

The referendum bucks the trend of the region's mini-Arab Spring, in which mass pro-democracy protests this month swept away veteran presidents in Algeria and Sudan.

Sisi made his grab for power in the turbulent years after the original Arab Spring protests of 2011 toppled long-time ruler Hosni Mubarak, who was followed in office by Islamist president Mohamed Morsi.

Sisi overthrew Morsi in 2013 and the following year won his first term as president. He was re-elected in March 2018 with more than 97 percent of the vote after standing virtually unopposed.

International observers slammed both elections while Sisi's government has been widely criticised for sweeping repression of its opponents -- both Islamists and secular groups.

For the past few weeks, Egypt's streets have been awash with banners and billboards urging citizens to "do the right thing" and vote "Yes", while popular folk singers have also exhorted voters to go to the ballot box.

A muted "No" campaign mounted from the diaspora and online has been thoroughly muzzled as authorities have blocked over 30,000 internet domains.

Despite the deep concerns of human rights groups, Sisi has earned the support of many Egyptians and some Western powers by presenting himself as a bulwark against Islamist militancy and turmoil at a time when fighting again rages in neighbouring Libya.

Many voters, such as retired banker Ramez Raouf, view Sisi as a champion of stability.

"Look, I am against a few of the changes such as extending the president's terms... but I am still going to vote 'yes' anyway," Raouf, 63, told AFP.

"Because the military will protect the civilian nature of the state, and that's important to me," he said.

Parliament has already voted overwhelmingly this week to approve the changes, including extending presidential terms from four to six years.

The referendum also proposes other changes to the five-year-old constitution, among them the creation of a second parliamentary chamber and a quota ensuring at least 25 percent of lawmakers are women.

Think-tank the Soufan Center said the main effect of the referendum would be to "solidify Sisi's grip on the Egyptian political regime" in a country that "has become even more autocratic than it was under Mubarak".