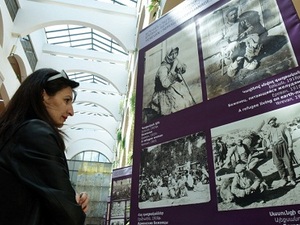 Turkish police on Wednesday blocked protesters trying to hold a commemoration in Istanbul of the 1915 massacres and forced deportation of Armenians.

Troops from the Ottoman Empire -- which preceded modern-day Turkey -- were responsible for mass killing of Armenians, but Turkey has always denied that the incident amounted to genocide.

France on Wednesday holds its first "national day of commemoration of the Armenian genocide" in a move that has angered Turkey's government.

About 100 protesters, including some French and European Parliament lawmakers, attempted to hold a ceremony in Istanbul to mark the massacres, but were prevented by police, an AFP reporter said.

"It has been nine years now that these commemorations of the Armenian genocide are being held here, and it is the first time that the state prevents us," said Benjamin Abtan, one of the activists at the Istanbul rally.

Armenians commemorate the massacres on April 24 -- the day in 1915 when thousands of Armenian intellectuals suspected of harbouring nationalist sentiment and being hostile to Ottoman rule were rounded up.

Turkish President Recep Tayyip Erdogan has called French leader Emmanuel Macron a "political novice" for the French commemoration and pointed to abuses by French troops during the colonial era.

"If we look at those trying to give lessons on human rights or democracy to Turkey on the Armenian question and the fight against terrorism, we see that they all have a bloody past," the Turkish leader said on Wednesday.

French Prime Minister Edouard Philippe will lead the commemorations in Paris by giving a speech and laying flowers at a Monument for the Armenian Genocide erected on the north bank of the river Seine in April 2003.