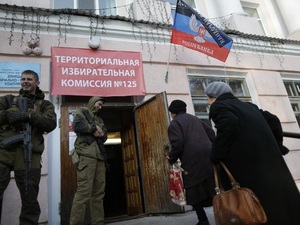 The decree, published on the Kremlin website, is aimed at residents of the unrecognised Donetsk and Lugansk republics that broke away from Kiev in 2014 and are governed by Moscow-backed rebels.

People living in the rebel republics will be entitled to receive a Russian passport within three months of applying for one, it said.

The move "aims to protect the rights and freedoms of a person and a citizen and is guided by generally accepted principles and norms of international law", the document said.

The conflict between the Ukrainian government and breakaway rebels began after Moscow annexed Kiev's Crimea peninsula in 2014. The war has claimed some 13,000 lives.

He has pledged to "reboot" peace talks with the separatists that also involve Russia and the West.

The leaders of Ukraine, Russia, France and Germany signed peace agreements in Minsk in 2015 that aimed to put an end to the conflict, but fighting has continued with no clear end in sight.