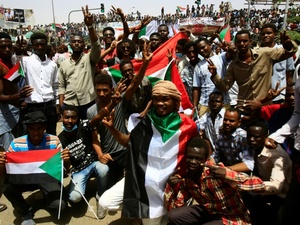 Sudan's ruling military council said Wednesday it has invited protest leaders for talks later in the day, as demonstrators continued to demand that it cede power to a civilian government.

"The military council invites the leaders of the Alliance for Freedom and Change to a meeting at the presidential palace this evening," a statement from the military body said.

Earlier in a press conference a senior opposition leader said protest leaders were prepared to meet directly with the head of the military council General Abdel Fattah al-Burhan.

"We are ready to talk with the chief of the military council and I think the issue can be solved through dialogue," Omar el-Digeir told reporters.

On Sunday the protest leaders announced they had suspended talks with the military council, accusing it of being an "extension of the regime" put in place by ousted president Omar al-Bashir.

The army toppled Bashir on April 11 after months of widespread protests against his iron-fisted rule.

Thousands of protesters have massed outside the army's headquarters in central Khartoum, demanding that the new military leaders hand over power to a civilian adminstration.