Moscow and Pyongyang, a Timeline of Relations 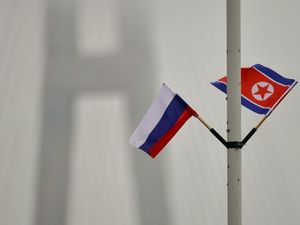 North Korea's close relationship with the Soviet Union cooled in the 1990s under a new Russian power, but were revived in the 2000s as Moscow sought support amid a new standoff with the West.

At the end of World War II, the Soviet Union was given trusteeship of the northern half of the Korean peninsula, the United States having the same for the south.

Moscow installed Kim Il Sung -- who had led a Korean contingent in the Soviet army -- as leader and he established the communist North Korean state in 1948.

Two years later, with the backing of China and the Soviet Union, Kim's forces invaded the South, triggering a war that claimed four million lives before a 1953 armistice.

As the Cold War stand-off between the Soviet Union and the West deepened, North Korea benefited substantially from Soviet aid including in weapons and fuel.

A 1961 treaty signed between Kim Il Sung and Nikita Khrushchev committed the Soviet Union to defend North Korea in the event of an attack.

Kim Il Sung visited Moscow in 1984 and in 1986, when he met Soviet leader Mikhail Gorbachev for the first time.

- Relations break off - The special relationship ended in 1990 when Gorbachev established diplomatic relations with South Korea, the North accusing it of treachery.

The Soviet Union's break-up in 1991 ushered in a Russian regime favourable to the West; as the Cold War ended, so did Soviet aid to the North.

In 1992 president Boris Yeltsin declared the 1961 treaty void, saying it existed "only on paper".

Putin revived relations between Russia and North Korea -- lead by Kim Jong Il who had taken over when his father died in 1994 -- shortly after he became president.

Just months into his presidency in 2000 Putin travelled to Pyongyang, becoming the first Russian leader to visit the reclusive state.

He and Kim Jong Il agreed to put relations back on track and signed a broad military cooperation agreement.

In 2003 -- as international concerns mounted that North Korea was secretly developing nuclear weapons -- Russia took part in a first round of six-country talks aimed at making Pyongyang abandon its nuclear arms programmes.

Kim Jong Il made his third and final trip to Russia in 2011, four months before he died. His son Kim Jong Un took over.

In 2014 Moscow cancelled 90 percent of the debt Pyongyang owed to Russia dating back to the Soviet era.

The February 2018 Winter Olympics in South Korea saw a spectacular detente between the two Koreas and with the United States.

Just months later US President Donald Trump met Kim in an unprecedented summit in Singapore, the North Korean leader pledging to "work towards complete denuclearisation" of the peninsula.

Putin praised the meeting and reiterated that he too would be happy to meet Kim.

However a second Trump-Kim summit in February 2019 in Hanoi ended in failure, with Pyongyang saying later it was again testing weapons.

Kim's meeting with Putin will be his first with another head of state since returning from Hanoi.