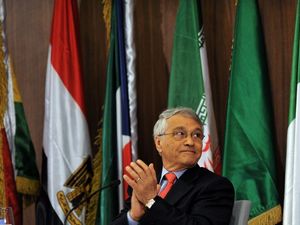 Algerian authorities apparently intent on clearing away two decades of cronyism following the ouster of veteran leader Abdelaziz Bouteflika have reopened an investigation against an ex-energy minister close to the former president, according to state media.

Chakib Khelil, 79, who was energy minister for 10 years until he quit the government in 2010, faces renewed accusations of corruption that he had beat a few years ago, the APS news agency reported.

News of the investigation against him adds to the arrests this week on graft charges of four tycoons with links to Bouteflika as well as the detention of the country's richest man, Issad Rebrab, on suspected false customs declarations.

Rebrab had backed the anti-Bouteflika protests that ultimately forced the president's April 2 resignation, and his Cevital company said it was "astonished" by his arrest.

Khelil, who holds Algerian and US nationality, fled to America when he was charged with financial malfeasance along with the head of Algeria's state oil company Sonatrach and several of its top executives.

While the Sonatrach CEO and executives were convicted, Khelil was cleared of charges that he was involved in receiving "commissions" from Italian oil giant ENI for Algerian contracts, and he returned to Algeria in 2016.

But Algeria's supreme court on Wednesday said it had received "two prosecution briefs" against Kehlil "and his accomplices", APS reported.

One brief had to do with a "violation" of laws regulating capital transfers abroad, and the second was about "two contracts by the Sonatrach company with two foreign companies in violation of the law".

The development came one day after the head of Sonatrach, Abdelmoumen Ould Kaddour, was fired and replaced on the orders of the country's interim president Abdelkader Bensalah.