Sudan: From Bashir's Ouster to Demand for Civil Rule 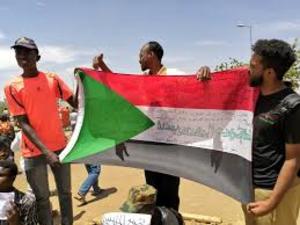 Anti-government protests that erupted in Sudan more than four months ago have led to the ouster of veteran leader Omar al-Bashir and evolved into a push for civilian rule.

Here is a timeline.

Hundreds take to the streets in various cities on December 19, 2018 to protest the government's decision to triple bread prices. The demonstrations quickly spread and broaden into calls for Bashir to quit.

Clashes break out as police try to disperse the crowds and eight demonstrators are killed in two cities, the first of dozens of deaths in the protest movement.

Bashir vows "real reforms" on December 24, but the demonstrations grow.

On February 22, Bashir declares a nationwide state of emergency, also dissolving the federal and provincial governments.

Two days later, a new prime minister is sworn in as riot police confront hundreds calling for Bashir to resign.

On March 1, he gives up his powers as chief of the ruling party.

On April 6, thousands gather for the first time outside the military headquarters in Khartoum, chanting "one army, one people" in support of the armed forces.

They set up camp, defying attempts by police to dislodge them with tear gas and gunshots fired into the air.

On April 9, police follow the military in ordering their forces not to take action against demonstrators.

On April 11, defence minister Awad Ibn Ouf announces Bashir has been removed from power and detained.

He says a transitional military council will govern for two years, and is later sworn in as its head.

Elation at the ouster of Bashir turns to anger as the opposition accuses the regime of keeping in place "the same old faces". Thousands remain camped outside the army headquarters.

On April 14, protest leaders deliver demands to the new military rulers that include the immediate transfer of power to a civilian government.

Two days later, Bashir is moved to prison in Khartoum. The military rulers subsequently announce they have also detained two of his five brothers.

On April 18, huge crowds mass outside the army headquarters to keep pressure on the military council.

Protest leaders and Sudan's army rulers hold a first round of talks on April 20.

In his first interview on state television since taking power, Burhan says on April 21 his council is "committed to give power to the people".

On April 23 hundreds of protesters arrive in Khartoum from Atbara, the birthplace of the protest movement, to join the mass demonstrations as journalists, doctors, engineers and veterinarians also march.

Protest leaders call for a million people to march on April 25, with judges announcing they would join the sit-in for the first time.

Protest leaders say a "joint committee" is being set up with the military council to "discuss outstanding disputes".