Syria Negotiators in Kazakhstan for Talks 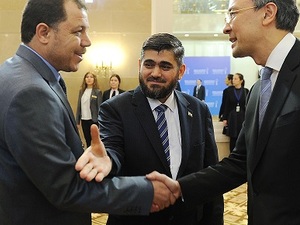 Delegations from Iran, Russia and Turkey were in Kazakhstan's capital Nur-Sultan on Thursday seeking an end to the conflict in Syria while shoring up their interests in any future political settlement.

Kazakhstan's foreign ministry confirmed that teams from the three powers as well as negotiators from the Syrian regime and its armed opponents had arrived in the capital Thursday.

Talks will take place throughout the day in "two-way and three-way formats" ahead of an expected plenary session on Friday, the ministry said in a statement.

The situation on the ground in the northwestern region of Idlib, under the administrative control of Syria’s former Al-Qaeda affiliate Hayat Tahrir al-Sham (HTS), is expected to feature prominently in the talks.

Idlib has been protected from a massive regime offensive by a September deal inked by Damascus ally Russia and rebel backer Turkey.

But regime bombardment has increased since HTS took full control of the region from rival rebels in January.

Other items expected to be included in negotiations include prisoner swaps and the distribution of humanitarian aid.

Russia, a backer of Syrian President Bashar al-Assad, has taken a lead role in diplomatic efforts in Kazakhstan that has largely sidelined UN diplomacy.

Tehran, like Moscow, is an ally of Assad's regime, while Ankara has aligned itself with the rebels but has repeatedly threatened to attack Kurdish fighters on the Syrian side of its southern border that it views as "terrorists".

A Western diplomat told AFP that Moscow will be aware of perceptions that recent rounds of the so-called "Astana process" have made little progress and may push to speed up the creation of a long-awaited constitutional committee.

The capital of Kazakhstan was called Astana until last month, when it was renamed after the country's outgoing president.

The committee is of particular interest to the UN which favours a Syrian-led resolution to the conflict but it may be hamstrung from the outset, the diplomat warned.

"Even if a Constitutional Committee is created, it will then take a long time to reach a very uncertain result," the diplomat told AFP.

Any proposal would therefore be "low risk" for Moscow, whose military intervention in 2015 has helped Damascus assert control over two-thirds of the country's territory.

Syria's war has killed more than 370,000 people and displaced millions since the conflict began with the repression of anti-government protests in 2011.

Anytime now lol. One has to keep in mind that they their own worst enemy and the beduin mentality will kick in and they will be back to blunderpusing each other lol.