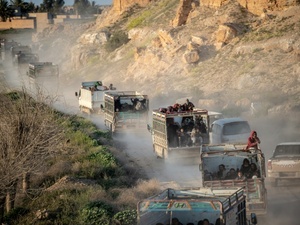 Attacks by two jihadist groups killed at least 17 Syrian government troops and militiamen in the northern province of Aleppo early on Saturday, a war monitor said.

Thirty others were wounded in the assaults by Al-Qaeda's former Syria branch, Hayat Tahrir al-Sham (HTS), and its ally Hurras al-Deen, which remains affiliated to the global jihadist network, the Britain-based Syrian Observatory for Human Rights said.

The attacks in the southern and southwestern countryside of Aleppo province were launched shortly after midnight and triggered clashes that continued until dawn, Observatory head Rami Abdel Rahman said.

He said the fighting subsided after Russian aircraft struck jihadist positions in the area, prompting the fighters to pull back.

Eight jihadists were killed, he added.

On Friday, Russian strikes killed 10 civilians in Idlib province, the hub of  territory held by the jihadists of HTS in northwestern Syria.

Russia and rebel-backer Turkey in September inked a buffer zone deal to avert a massive government offensive on the Idlib region, but the deal has never been implemented.

The region of some three million people has come under increasing bombardment since HTS took full control of it in January.

The latest Russian air raids came after two days of talks on the Syrian conflict between Turkey, Russia and fellow government backer Iran in Kazakhstan earlier this week.

The three governments expressed concern over the growing power of HTS in Idlib and parts of adjacent provinces, and determination to cooperate to eliminate the jihadist group.

The civil war in Syria has killed more than 370,000 people and displaced millions since it began with the bloody repression of anti-government protests in 2011.

Making the World A Better Place
17 Dead Shia Terrorists at A Time.

Good riddance is in order.