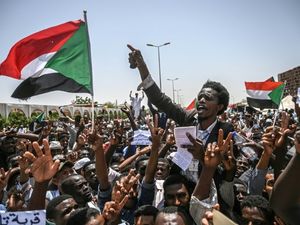 Sudanese student Alaa Salah emerged as a singing symbol of the protest movement that toppled leader Omar al-Bashir, and now insists she will keep demonstrating until civilian rule is secured.

The 22-year-old engineering and architecture undergraduate shot to prominence when a picture of her in a white robe leading chanting crowds from atop a car in Khartoum went viral on social media.

Shortly after on April 11 the army ousted long-time leader Bashir, but since then a 10-member military council has resisted calls to handover power.

Every evening Salah heads down to join the crowds still camped out around the army headquarters in the capital -- leading thousands of demonstrators in singing out their calls for change.

"We are staying at the protest site until all our demands are met," Salah said in an interview with AFP.

"We want a democratic civilian government and that all corrupt figures of the previous regime be prosecuted."

Like many gathered outside the military complex she insists "we don't want just words, we want actions".

"Bashir was just the face of the regime, we want the entire regime to be uprooted."

Portraits of Salah -- dubbed "Kandaka" or Nubian queen online -- have appeared on murals across Khartoum in the wake of Bashir's fall.

The iconic image captured her wearing the traditional flowing white headscarf and skirt, her golden full-moon earrings reflecting in the fading sunset.

The outfit is a nod to the lead role played by women in the protests that ended three decades of iron-fisted rule by the veteran leader.

"I wore this attire as part of an initiative to support the revolution," she says.

Symbolic too is the chant that she recites to raise the spirits of the demonstrators.

The words are those of a well-known Sudanese poem that says "a bullet does not kill, what kills is the people's silence" -- a sentiment she says aptly captures Sudan's new spirit of defiance.

The protest movement in the country initially erupted in December in response to tripling of bread prices by the authorities.

It swiftly mushroomed into nationwide demonstrations against Bashir led by an umbrella group of unions and opposition political groups called the Alliance for Freedom and Change.

"I'm one of those who took to the streets based on the schedules announced by the Alliance for Freedom and Change," Salah said.

She also participated in protests on her campus as the demonstrations on the street drew a brutal crackdown from the authorities.

Officials say at least 65 people have been killed in protest-related violence since December.

Despite her new-found fame as the face of the uprising, Salah insists that she intends to limit her involvement in politics to these protests.

"I have no political affiliation. I am a normal citizen who took to the streets for the sake of our country," she said.

"I don't have any aspirations in politics ...but I like to do social work."